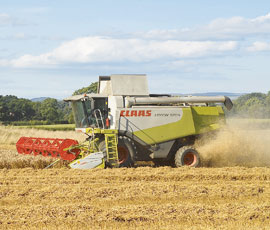 Cereal prospects for the next two harvests are looking good, but incessantly rising costs will blunten the returns from the high prices currently on offer, according to the latest “Loam Farm” results.

Figures from the 2009 harvest year show that the margin from production was negative. It took the Single Farm Payment and ELS money to bring the farm back into the black. This would be a situation mirrored on many farms, as it was a high cost year (fertiliser and fuel) while crop prices were low.

For the 2010 harvest, costs were lower. And, of course, grain prices started to take-off just before harvest, leading to much better sales values. However, like many cereals businesses, Loam Farm sold some of its grain forward, so didn’t achieve the post-harvest “headline” prices for all grain. The average selling price for feed wheat from harvest 2010 was £126.50/t. A further factor reducing the profit was the effect of the early summer drought.

Turning to the 2011 crop, the budgeted wheat yields have been trimmed from their normal levels due to the prolonged bout of dry weather. The actual effect of the drought will not be known until the combines start, but it is thought that yield potential has been compromised and it is prudent to reduce forecast yields.

Some comfort from the weather comes in the form of the prices available for the coming harvest. Loam Farm has already committed 40% of its wheat and half of its oilseed rape. Some sales have also been made for the 2012 crop.

As things stand, 2011 is budgeted to continue the situation seen for 2010 harvest with the business being profitable from production, even before the SFP and ELS. This should be the target for all arable businesses, especially with the prospect of CAP reform looming once again.

Rent and finance charges have risen sharply for the 2011 year. Loam Farm rents 360ha of bare land on FBTs – under two agreements of 180ha. One came up for renewal in autumn 2010, and high grain prices saw a new three-year deal agreed at a figure of £300/ha (£120/acre). The other agreement is due to end this autumn. At the moment the 2012 budget assumes this land is retained, and a similar rent to the other parcel can be agreed. However, the landlord may be looking for more, and a deal may not be reached – especially if grain prices remain high. This illustrates how a profitable season or two can build cost into an arable business, which it then has to live with for a number of years (the three year life of the FBTs in this case).

Building cost into a business also applies to investment in equipment and buildings. Like many other holdings, Loam Farm has ageing and inadequate grain storage. Although not yet in the budgets for 2011 and 2012, consideration is being given to whether to invest in a new grain store.

Many farms calculate the cost of production on a per tonne basis – both to highlight areas for improvement, and as a marketing aid. Loam Farm is no exception. For this reasonably well-managed business the cost of production for a tonne of feed wheat for harvest 2011 is around £119/t. This, of course, is pending final yields and harvesting costs.

For 2012, this rises to a forecast £124/t, with higher fertiliser and fuel prices, as well as the previously mentioned rental increases, largely to blame. Many farms will probably see a larger increase in variable costs between 2011 and 2012 than those illustrated by Loam Farm.

With current futures prices this is still well below the budgeted sale value and a price of £145/t for feed wheat has been put in the 2012 budget. This (provisionally) results in another year of profitability even before support. However, there is a drop in returns for this business compared with 2011 as the cost increases have their effect.

Of course, the 2012 harvest is a long way off and the volatility of recent seasons is unlikely to have gone away. 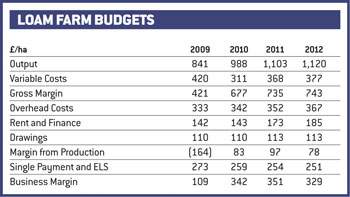 Advice on hand at Cereals 2011

• Andersons’ consultants will be available on their stand (I929) at Cereals 2011 to discuss the Loam Farm model and ways they can help improve the performance of arable farmers’ own businesses.