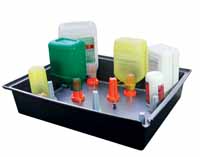 A chemical container rinsing nozzle developed to shift the thick, sticky deposits left on the base of containers by some crop chemical formulations has been developed by Hypro EU to complement its regular ProClean model.

Hypro engineers concluded that it was not possible to achieve this goal by modifying the ProClean, so they came up with a different device that would do the job.

So, whereas the ProClean has rotating jets projecting upwards and downwards to give a thorough rinsing action of the neck and handle recesses, as well as the main body of the container, the ProClean Plus is targeted at the base. Its focus is to remove the persistent, sticky residues left by some crop protection and trace element materials that with a conventional rinsing nozzle can take several minutes to remove.

“Placing a container over the nozzle at an angle and then tilting it slowly from one side to the other enables the jet to strip away residues in seconds,” says Mr James. “The two nozzles do a complementary job, so we recommend giving containers with hard-to-shift residues an initial rinse with the ProClean Plus and a second one with the ProClean to ensure the corners, moulded handles and the neck area are properly rinsed clean.”

This process can be carried out by either batch rinsing and swapping nozzles or by installing the two nozzles side-by-side in the chemical induction bowl. A conversion kit for Watson & Brookman stainless steel hoppers is available that plumbs the return flow from the ProClean supply into a second push valve for the ProClean Plus. It costs about £220, the ProClean Plus nozzle itself is £30.

Once rinsed, containers need to be drained before being consigned to the recycling container and a new drip tray from Portek is designed to do the job easily.

“It’s based on an idea from a Gloucestershire farmer who’d made a drip tray with a wire grid to hold the containers,” explains Hugh David of Portek. “We liked the idea in principle and worked together to improve it.”

The resulting Chemdrip Tray is easily portable because the all-plastic structure weighs only 5.5kg and it is more versatile than other designs because it can be adapted to suit any combination of different size containers.

“What makes the Chemdrip Tray special is the fluted cones that screw on to threaded pillar fixed to the base of the tray,” Mr David explains. “We supply five large orange-coloured pillars for bigger containers and five grey coloured ones for smaller bottles; they can be screwed on to the 15 pillars in any combination to suit the size of containers being used.”

The cone shape caters for different neck opening sizes and the vertical flutes ensure that water can easily drain out however snugly containers fit on to them. The tray itself is moulded with a pouring spout in one corner for easy emptying.

Dealers will typically sell the Chemdrip Tray for about £149, the complementary Chemdrip Bund for placing beneath a chemical induction hopper is £75.

“Apart from making the sprayer filling operation as quick and easy as possible, using these trays will minimise the risk of spillage and help meet standards of pollution control expected by farm assurance schemes,” says Mr David.