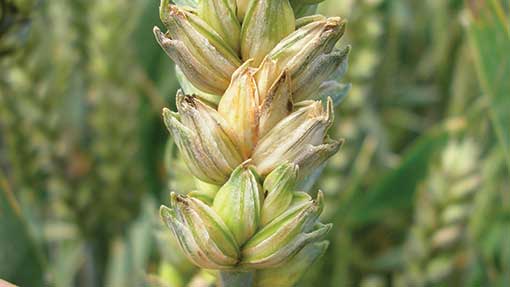 Fusarium ear blight can be a costly problem, with reduced wheat yields and loads being rejected because of poor quality and mycotoxins exceeding limits.

But predicting the risk can prove difficult, with seven different species (see panel) causing ear blight and all responding differently to the season.

For example, years with similar levels of fusarium ear blight can have widely contrasting numbers of rejections because of mycotoxins.

To help growers better understand the risk factors, FERA plant pathologist Phil Jennings has looked back at the past seven seasons, examining data from three sources to build a picture of what was happening.

The first source is the live monitoring of five sites across the UK since 2008, looking at infection levels at the stem base and leaf layers, which feeds into the CropMonitor web service.

Also included is data from analysis of ear blight isolates from growth stage 73 and from 2006 mycotoxin analysis funded by the HGCA.

One trend he noted over time was the stepwise increase in infections following the key epidemic years of 1998 and 2007 (see graph below). Levels never returned to pre-epidemic levels in subsequent years.

In addition, Fusarium graminearum has been increasing over the years at the expense of Fusarium culmorum and this is significant in terms of mycotoxin levels, says Dr Jennings. “We were not seeing much graminearum before 1998.

“This is because F culmorum is splash-borne and will only spread about 1m. In contrast, F graminearum will spread at least 10m, being wind-borne, so you see a greater spread and toxin threat from the same amount of inoculum.

This switch from F culmorum to F graminearum has also been seen in other countries such as the Netherlands and Germany and he believes it can be linked with maize growing.

To better understand the seasonal effects, Dr Jennings looked at monthly Met Office rainfall and temperature figures and rated each month in terms of being above or below average, or average. 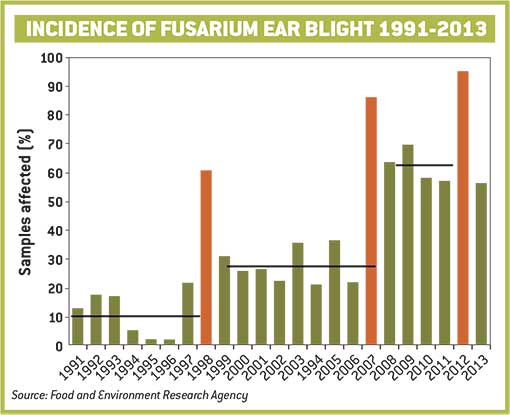 “We also saw differing levels of zearalenone (ZON), despite levels of fusarium ear blight being similar.”

In March to May, inoculum levels built up in crops. But the key difference was from July to September, which was much wetter in 2008. “DON is mostly produced in the chaff and, as it is water soluble, can translocate to the grain, particularly as the grain matures.

So, in 2008 the rain aided its uptake by the grains, hence the different levels of mycotoxin.”

ZON is a late-season mycotoxin associated with delayed harvests and again the wet July, August and September resulted in higher rejection levels in 2008. (31 versus 2).

In contrast, 2001 and 2012 had vastly differing levels of fusarium ear blight – it was much higher in the disastrous season of 2012. “However, rejections due to DON were similar, while ZON rejections were lower in 2012.”

The wet June and an extended flowering period in 2012 meant fusarium levels were high, but rainfall in July and August were average. “And while harvest was late due to later ripening of crops, it was not a delayed harvest because of the weather, so we were not seeing the high levels of ZON as seen in the delayed harvest of 2008.”

Finally, comparing 2012 with 2013, there were huge levels of inoculumn from 2012, particularly microdochium. However, infection was generally back to 2011 levels.

He puts the lower-than-expected risk down to the wet winter of 2012-13, as microdochium inoculum did not survive because of the waterlogged conditions, and the quite dry conditions during crop flowering.

Therefore, you can have similar years in terms of weather, but differing levels of pathogens. And even with high levels of infection, you don’t necessarily see high levels of mycotoxin. But knowing which species are present is key when deciding which product to use.

For F graminearum and culmorum, azoles are the most efficient and of these, prothioconazole came out best in FERA trials.

“But fusarium is not the whole story – some azoles that were effective against fusarium did not have good efficacy against microdochium. Prothioconazole was still giving good control,” says Dr Jennings.

Timing is the next crucial factor and as Tim Nicholson, commercial technical manager at Bayer CropScience, stresses: “The window for the T3 spray is the narrowest of any. Miss it by just a few days and you could see a huge drop off in control.

“The optimum spray timing is early flowering, GS62-63, when you see extruded anthers on the main tiller. If the weather is dry, you do have a bit more leeway, as the best time to apply is within a day or two after rain.”

Dr Jennings adds that product choice can also widen the window. “Tebuconazole gives five days’ protection, while with prothioconazole you get an extra two days and can go on earlier without the concern of losing protection at the end of the flowering period.

“But ensure you hit it with a robust rate,” adds Mr Nicholson, who advises a minimum of 0.72 rate (150g/ha) of prothioconazole.

Using prothioconazole at T1 and T2 can also help reduce levels overall, although T3 remains the key ear blight timing. “Seven years of trials with Harper Adams University College looking at the suppression from prothioconazole at the T1 and T2 showed reductions in final fusaria and mycotoxin levels in addition to a T3 spray alone.”

Although it is too late to treat ear blight by the time you see symptoms, knowing which species are present can help to assess mycotoxin risk.

First F graminearum and culmorum produce the classic symptoms of ear bleaching, with white grains appearing above the area of infection.

These two strains produce either deoxynivalenol or nivalenol and both produce zearalenone later in the season, given the right conditions.

Fusarium avenaceum, microdochium nivale and M majus are spikelet bleachers, affecting individual spikelets rather than the whole ear. Only F avenaceum produces mycotoxins. These include the enniatins, moniliformin and beauvericin.

The third type of symptoms are blotches on the glumes. They don’t enter the grain, so you don’t see so much yield loss, but they produce a wide range of mycotoxins, including nivalenol, HT-2 and T-2 toxins.