Syngenta is one of the world’s leading agriculture companies, comprised of crop protection and seeds. Our ambition is to safely help feed the world while taking care of the planet.

As fertilisers have spiralled upwards in price, and cereal growers look to getting the most from them, interest in improving rooting to help crops gain better access to soil nutrients has increased.

Using a cereal seed treatment that not only reduces disease, but has also been shown to improve root growth, is an attractive option.

A fungicide seed treatment is applied first and foremost to reduce disease. Microdochium nivale, which is estimated to be present in a third of British soils, can severely reduce cereal establishment if not adequately controlled.

Additionally, there are diseases such as leaf stripe in barley which have been kept at bay by seed treatments for years, but are at risk of increasing if appropriate seed treatments are omitted.

Not only does Vibrance Duos control seed-borne Microdochium nivale – with winter wheat trial results last year showing an extra 0.45 t/ha over untreated seed and an extra 0.23 and 0.27 t/ha over two other seed treatments in a Microdochium situation – it also has approval against a range of other seed-related diseases.

In addition to disease control, Vibrance Duo comes backed-up by a huge volume of data showing substantial improvements in root growth in several of these crops.

As a topical example, results this year have shown that Vibrance Duo boosted root weight of the popular winter wheat variety Gleam by 60% over untreated.

It also boosted root length of November-drilled SY Insitor – which is being evaluated as a vigorous-rooting winter wheat – by 85% compared with an alternative seed treatment.

And in independent work this year, it has also given increases in root volume and root surface area.

If you can improve root growth, it follows that a crop should be better equipped to scavenge for soil nutrients and moisture.

Increasing rooting depth by just 1cm would enable a crop to access an extra 130 tonnes of soil per hectare, based on an average soil bulk density of 1.3 tonnes per cubic metre.

Well-rooted crops are also potentially more resilient to the effects of uncertain weather.

On light land, which is often drought-prone, we have seen a 38% improvement in green leaf area from Vibrance Duo-treated seed compared with an alternative seed treatment, and a 0.34 t/ha yield increase.

Hybrid barley is already known for producing vigorous roots due to its hybrid vigour, but Vibrance Duo has still improved hybrid barley root growth, for example producing a 36% increase in rooting and a 0.77 t/ha increase in yield over an alternative seed treatment in the hybrid, SY Kingsbarn. 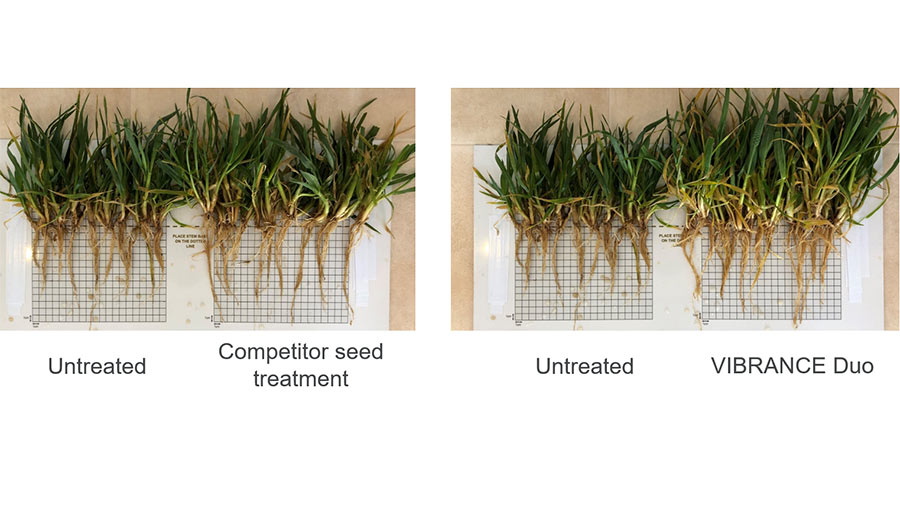 Vibrance Duo can be used on most types of winter and spring barley seed, but cannot be used on barley seed crops grown for certified seed production. In high-risk loose smut situations in barley – for example, untested or loose smut-infected farm-saved seed, or when planning to farm-save seed – it should be used with a loose smut-active seed treatment partner.