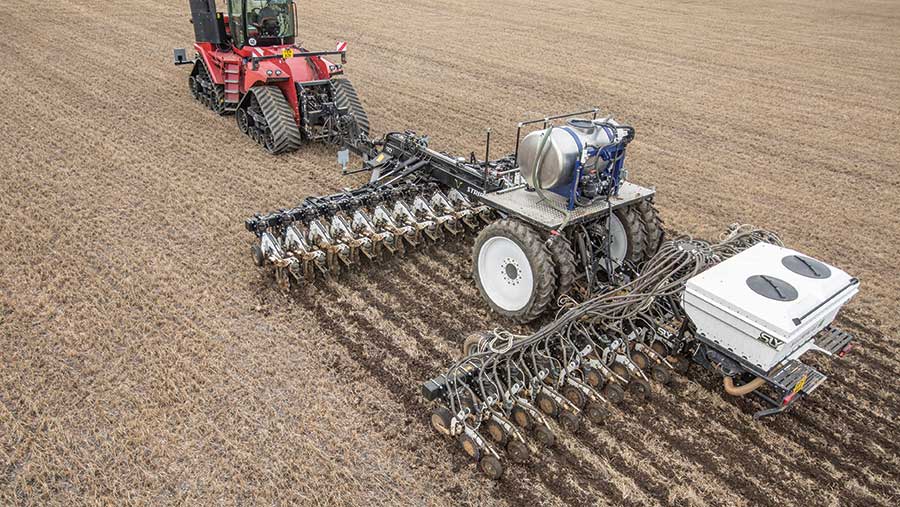 If it’s possible to cultivate only the ground where the crop will grow, why waste money moving soil across the entire field?

That is the question posed by proponents of strip cultivation, who highlight the cost- and energy-saving benefits of the technique alongside the attractions of leaving more than half the field surface intact.

Growers keen to adopt the technique for establishing oilseed rape, maize, sugar beet and other wide-row crops, have a number of implement options.

All are based on working principles developed in North America, but adapted to a greater or lesser extent to suit power, practicalities and practices prevalent on farms in Europe.

Common to all, however, is the objective of creating a well-cultivated strip of soil largely free of residues from the previous crop, while leaving the land between them untouched.

Cultivating the strip is achieved by deploying a sequence of tools, typically comprising a straight- or wavy-edge disc to cut through trash and the soil surface; notched discs or angled finger wheels to sweep material from the strip to be cultivated; and a tine that tills the soil to sufficient depth to create a seed-bed and ensure good drainage.

Positioning the tine between a pair of discs prevents soil being thrown sideways off the strip but the discs can also be angled slightly to build tilth into a “birm” before the finishing tool breaks down any clods and consolidates the tilth to conserve moisture and prepare it for drilling.

In addition to general build quality and the standard of components such as bearings used, features distinguishing one implement from another also include differences in tool design and mounting, mechanisms for down-pressure and depth control, the way adjustments are made and opportunities for altering strip width and strip spacing for different crops.

Winter oilseed rape is an obvious candidate for strip-tillage sowing, especially for growers disillusioned with the subsoiler trickle broadcasting approach.

This is because it provides a properly prepared seed-bed and good control over seeding depth using coulter kits added to the strip-till implement.

It also meets the requirement for a relatively quick one-pass system that potentially does a better job of conserving moisture and discouraging weed seed germination than full-width cultivation. And, of course, it consumes less power.

The wider-spaced rows that result from establishing oilseed rape by strip-tillage may have positive implications for canopy structure and light interception, while placing fertiliser into the root zone adds to the basic advantages of the technique for this crop.

But while some growers have dabbled with this approach to see if regulated plant spacing would allow lower seed rates, it is more widely being used for sugar beet and forage or energy maize.

In addition to the benefits of strip tillage that apply to other crops, a further attraction to sugar beet growers on light soils is its potential to reduce wind blow soil erosion. Leaving the inter-row soil intact can reduce wind velocity by up to 50%, according to research in the US.

Using strip cultivation for maize has become routine practice for a handful of growers who took the initiative to import strip-tillage cultivators before machinery suppliers here took them on.

Among the benefits they report over ploughing and cultivating are a significant reduction in the amount of fuel used, reduced moisture loss and improved soil structure over time, together with lower cultivation costs.

Strip-tilled soils tend to take a little longer to warm up in the spring, but growers say crops soon compensate for a slight delay in sowing date.

In a dry year, the technique is effective at retaining soil moisture, especially when using a strip cultivator and precision seeder in combination.

The one-pass approach, using a strip cultivator with mounting points for a seeder is certainly feasible on light soils, but heavier soils benefiting from autumn cultivation and winter frosts dictate a multi-pass approach, with strips refreshed ahead of the drill.

High-definition repeatable steering guidance is recommended to ensure the precision seeder works accurately into the tilled strips, although slackening off the three-point linkage can be sufficient for a precision seeder to successfully align with the cultivated strips. Some operators have used simple chain markers to help.

While fertiliser placement is an obvious addition to a strip-till cultivator, strip tillage for maize – and potentially other row crops – is also an opportunity to exploit cattle or pig slurry, and digestate from an anaerobic digestion plant.

These nutrient sources are best applied by dribble bar, trailing shoe or injector to minimise loss to the atmosphere, with injection being the most effective.

So it makes sense, suggests German slurry equipment specialist Vogelsang, to use a strip cultivator as an injector.

The company’s XTill ProTerra and XTill VarioCrop tanker- or tractor-mounted implements dispense slurry at root level from the cultivating tine – at two adjustable depths simultaneously in the case of the VarioCrop model.

Unlike the ProTerra version, on which strip spacing is set at 75cm, the VarioCrop model offers added versatility from being able to work with adjustable strip width up to 25cm and different strip spacings – 45cm, 50cm and 75cm on versions with up to eight cultivating/injecting units and 50cm or 75cm with nine to 12 units.

Kverneland’s Kultistrip also has variable strip spacing – from 45-80cm – to suit crops from sugar beet and oilseed rape to maize as a result of clamping the cultivating units to a square tube toolbar.

Each is carried on parallel linkage to maintain correct alignment and all adjustments are made tool-free.

In addition to a macerator and distribution head kit for injecting slurry, the Kultistrip can be fitted with a solid fertiliser placement option, comprising a front-mounted hopper and air transport and distribution system.

This feeds outlets positioned behind the cultivating tine and adjustable to trickle granules into the root zone, a little deeper than is usually feasible with placement on a precision drill.

For similar reasons there is a choice of finishing tools, comprising crumbler roller, soft rubber press wheel and V-bar crumbler.

Having initially introduced the Kultistrip in 3m, 4.5m and 6m rigid frame sizes, Kverneland is expanding the range with folding models at 4.5m and 6m, which will better suit UK growers wanting the outputs these sizes can deliver.

The line-up then continues with folding versions starting at six rows with the wider spacing or seven rows with 55cm and 60cm.

Individual stone protection mechanisms are provided for each of the soil working elements, which begin with a lightly fluted or wavy-edge disc ahead of debris-sweeping star wheels with fine threaded worm-screw adjustment.

Wavy edge or notched discs fitted either side of the tine provide some cultivating action as well as limiting soil throw and the chisel tine itself, adjustable to 30cm working depth, is protected by a hydraulic non-stop device.

An open tine crumbler and soft rubber press wheels are available to finish the job, together with a fertiliser placement kit.

Liquid as well as solid fertiliser placement is offered with one of the newest strip cultivators available, the Inro from French manufacturer Carré.

The 600-800-litre tank is mounted on the implement, which can be regulated in relation to forward speed, and comes with a built-in rinsing water reservoir.

Mechanical and hydraulic rear couplings – and a pto shaft extension – can be added for tandem working with a seed drill, along with bout markers for tractors lacking guidance.

Hydraulic break-back protects the tine, which has pin-and-hole depth adjustment and is flanked by a pair of 460mm fluted or wavy edge discs.

All are mounted on a frame attached to the tool bar by parallel linkage.

A chain roller is among the finishing tool options, in addition to a soft rubber wheel and a pair of serrated cast presswheels.

In addition to the tractor- or tanker-mounted versions, Sly also now produces trailed versions with a central backbone chassis supported on large diameter wheels to provide increased capacity from wider working widths up to 12m.

Rear linkage and a seeding toolbar can be added to the trailed models, with the further option of being able to offset the seeders to sow cover crops into the edge of autumn-cultivated strips as they are being freshened for spring crops.

The latest Stripcat has pneumatic rather than hydraulic “springs” for quick adjustment of down pressure on the parallel linkage that connects each cultivating assembly to the mainframe and the tilth packing by the finishing tool. Even pressure across the implement is ensured by connecting all the suspension units.

Soil is worked using a wavy edge disc, its working depth being regulated by two polyurethane wheels positioned alongside that also trap and hold material to help the disc cut through.

Aggressively angled and profiled trash-clearing discs from US manufacturer Sunco come next; they are slightly offset from each other to be sure of working the entire width of the strip.

Spring tension, which is adjusted by pin and holes on the disc mounting leg, keeps them in contact with the field surface while also providing break-back deflection over large stones.

The following chisel tine has interchangeable points, including a hard-wearing tungsten tip option, and is set deep enough to encourage drainage and rooting.

Then the notched discs either side prevent soil from being thrown beyond the cultivated strip.

They are adjustable forwards and backwards, up and down, and for angle to get the right set-up for different soils and working speeds.