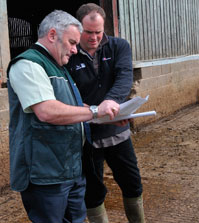 A farming couple who introduced a simple system to better manage their farm slurry and effluent have received an award from Wales’ rural affairs minister.

John and Anna Booth, who run a 300-cow herd at Rhual Farm, Mold, were announced as winners of the inaugural Simple Solution Farm Awards on the first day of the Royal Welsh Show.

The awards are a joint venture by Environment Agency Wales and Farming Connect, the Welsh Assembly government’s support service for farmers, and aim to recognise farmers who make small scale changes to improve profits and benefit the local environment.

The Booths had put in place a number of measures to reduce the amount of effluent entering their slurry store.

These included harvesting clean rain water to use for watering and washing down yards, building sleeping policemen around the yard to separate clean and dirty water and redirecting and repairing guttering to keep rainwater out of the dirty water system.

The result is a reduction in the volume of slurry they must dispose of and it enables them to spread it at the best time of year, saving on fertiliser and other associated costs.

Minister for Rural Affairs, Elin Jones, said she hopes the award would lead to farmers taking simple measures to improve water quality and addressing issues such as nutrient management and diffuse pollution.

Chris Mills, director of Environment Agency Wales, said that the changes the Booths had made to their farm had made a huge difference. “Slurry storage for dairy farmers can be a real headache over the winter, especially in NVZ areas,” said Mr Mills.

“Now the Booths have control over their slurry, they can make the most of the nutrients for their crops and not have to waste time and money spreading it when they don’t need to.”

Runner-up was Gareth Richards, of Alltfyrddin, near Carmarthen, who has developed an innovative heating system on his dairy and sheep farm.