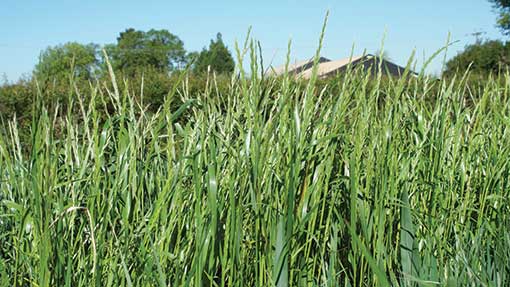 Target-site resistance to the ALS herbicides as seen in blackgrass has been confirmed in ryegrass for the first time in the UK, raising fears about a new grassweed threat.

This latest discovery could elevate ryegrass to the same status as blackgrass in the future unless growers in affected areas take early action to prevent its spread, warns Stephen Moss of Rothamsted Research, who identified the resistance mechanism in ryegrass seed collected in 2012.

“We already knew there was resistance to the ACCase herbicides in ryegrass, but we hadn’t found any evidence of ALS target-site resistance until now,” he says.

His finding has been confirmed by both Syngenta and Bayer CropScience in samples originally collected in 2012, as well as by researchers in France.

“This type of resistance is very common in Australia and other countries further afield, but Europe hasn’t reported the same difficulties,” says Dr Moss.

However, in France it was found at a low frequency in a small number of plants back in 2007, but remains an uncommon resistance mechanism there.

Back in the UK, Dr Moss liaised closely with Syngenta, who carried out further tests on his samples and identified ALS target-site resistance in two out of the 14 leaves sent to the company’s laboratory.

“All of the leaves were from plants that showed resistance to Atlantis, so the implication is that other mechanisms, such as enhanced metabolism, are more common. This supports previous work which indicates that target-site resistance, both to ACCase and ALS inhibitors, is currently less common in ryegrass than it is in blackgrass.”

“All of these tests confirm we do have this resistance mechanism in ryegrass. Fortunately, it is at a much lower frequency than is seen in blackgrass and the situation is still some years behind that of blackgrass. But this could change.”

The practical implications of the new mechanism are that products such as Atlantis, Unite and Broadway Star will no longer work as effectively where it has been detected in ryegrass, leaving growers with limited chemical options, he explains.

“In our work, we used Atlantis on the ryegrass sample with resistance and achieved only 52% control.”

His advice to growers who are having difficulties getting good control of ryegrass is to have samples tested for resistance. “There’s a danger that growers have assumed they have enhanced metabolism resistance, which is much more common.”

Where the weed is present at very low densities, there’s the option to hand-rogue or patch-spray it, he suggests.

Other measures include reducing reliance on high-risk herbicides and making better use of the pre-emergence materials. “Growers will still have the same conundrum as they do with blackgrass regarding Atlantis and Broadway Star use, as these will still give some control if only a small proportion of the population is ALS resistant.

“Axial can give good control, but it is affected by ACCase target-site resistance, which also occurs, although less commonly than in blackgrass.”

Cultural control methods also apply, says Dr Moss. “As with blackgrass, the use of techniques such as ploughing, stale seed-beds and delayed drilling can help, since the majority of the seed germinates in the autumn.”