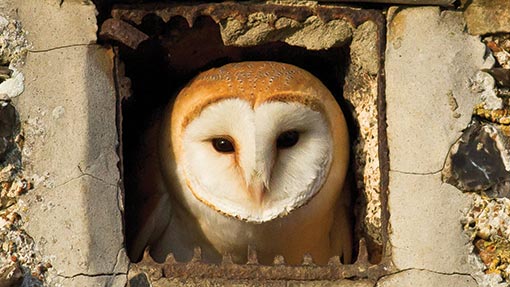 Saving Species is a monthly look at how growers can help key wildlife species by Peter Thompson, farmland biodiversity adviser at the Game and Wildlife Conservation Trust.

Barn owls are widely distributed across the UK – they can be found everywhere except on the high ground of Scotland and Northern England – but they suffered declines in the 1950s and 1960s due to the widespread use of organochlorine pesticides such as DDT.

But despite the inclement weather of the past couple of years – 2013 was the worst breeding season for the species ever recorded – barn owls have generally been doing well, with numbers on the increase since the mid 1990s.

Habitat: Farmers have played an important part in helping the barn owl population to thrive once more by planting grass margins alongside arable fields and leaving field corners of tussocky grass – ideal habitat for attracting the small mammals on which the owls feed.

They need plenty of areas with this sort of habitat, as on average a wild barn owl will eat four small mammals a night – that’s 1,460 a year.

The most frequently taken prey is the short-tailed field vole, which usually forms 40-80% of the diet, while wood mouse and common shrew are also commonly taken.

Key threats: Many good barn owl nesting sites are lost when redundant farm buildings get converted for non-agricultural use, or completely modernised to become totally secure, with no gaps for the owls to enter.

Once again farmers have and can help out, as they have been busy putting up nest boxes, even allowing barn owls to occupy areas such as the Fens that were previously devoid of suitable nesting sites. It is now estimated that three-quarters of British barn owls live in man-made nest boxes, so perhaps we should be changing its name to the “box owl”.

Tips to help numbers: Put up boxes in trees or on the side of buildings, away from busy roads, as barn owls are vulnerable to traffic as they hunt at roadsides. Barn owls like open countryside without too many trees – so choose these areas to position boxes.

Make sure there is plenty of unimproved grassland for them to hunt in, which may be whole fields, field corners or grass margins. Leave some areas uncut over wnter, as small mammal abundance is higher in uncut grass.

Peter Thompson is the farmland biodiversity adviser at the Game and Wildlife Conservation Trust. For more information, call the GWCT on 01425 651 060.