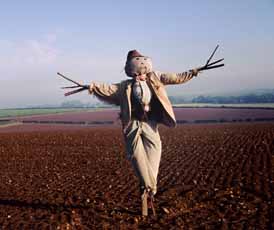 Traditional scarecrows are making a comeback as farmers fend off a pigeon problem that threatens to cost growers more than £50m in crop damage this year alone.

More than three-quarters of East Anglian farmers have suffered from pigeon-crop damage this season, reveals an NFU survey. Many of the 220 growers questioned reported heavy losses on oilseed rape.

Without adequate pigeon control, farmers could have lost up to one-third of their rape crops, the survey found. At harvest 2010 prices, this worst-case scenario would cost the region’s growers up to £53m.

As well as shooting and gas guns, farmers are using various methods to tackle the problem. Deterrents include mirrors, imitation animals, kits and even falconry. But the use of traditional scarecrows to good effect is perhaps the most surprising.

Some scarecrows are little more than disposable protective spray suits tied to a pole. But others – such as the one successfully employed by Lincolnshire farmer Mark Pettitt – are more intricate.

“I made a new scarecrow last Saturday, with the help of my youngest son,” he said. “We made it out of some JCB overalls stuffed with straw. It’s doing a fantastic job keeping pigeons off a 100ha block of rape.”

Gordon Redman, who farms at Lower Gravenhurst, Bedfordshire, said he had half a dozen boilersuited scarecrows watching over his rape crop. “They work better the more you move them around,” he told Farmers Weekly.

But shooting remains the most popular way of reducing crop damage. NFU adviser, Alex Dinsdale, said: “The survey shows that shooting is the most effective method, especially when coupled with other controls.”

The NFU has now teamed up with the British Association for Shooting and Conservation (BASC) to help farmers protect crops by putting them in touch with shooters who will keep pigeon numbers down.

Farmers can call the BASC regional centre on 01284 728752 for details of nearby pigeon shooters. All BASC members will be fully insured and familiar with the organisation’s code of practice.