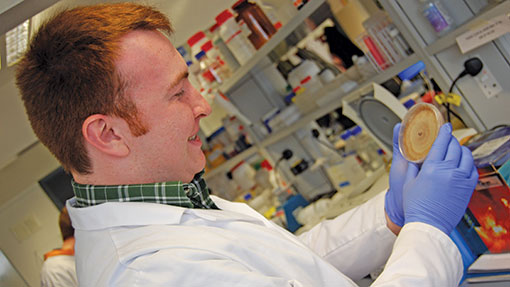 Research into whether soil pathogen build-up causes poorer yields in oilseed rape grown in tight rotations could see varieties resistant to the yield-sapping effects being developed.

“From the previous HGCA rotation project, we know oilseed rape grown one year in three is lower yielding than when grown in longer rotations. It also highlighted a build-up of pathogens in the soil, so it’s likely that one or more of these pathogens is linked to yield decline. I hope to survey 100 sites across the country and quantify the incidence of each using DNA-based techniques to pinpoint the species involved.”

The six pathogens on his list include species of pythium, rhizoctonia, verticillium, gibellulopsis, sclerotinia and plasmodiophora brassicae. The involvement of two further soil-borne pathogens –olpidium and pyrenochaeta – is also being investigated within a parallel Technology Strategy Board-supported project at Harper Adams University.

Fungal isolates of the six pathogens have been isolated from UK crops and will be used to inoculate pots growing oilseed rape in the glasshouse. Those species detrimentally affecting yield will be selected to enter field trials.

There’s also the possibility that nematodes are interacting with pathogens, so Mr McCormack is also examining the relationship between the beet cyst nematode, heterodera schachtii, and the fungi.

“These projects will improve knowledge about the distribution of the soil-borne pathogens affecting oilseed rape and how they contribute to yield loss. The concept behind the in-field test for clubroot has been proven for brassicas and it now needs linking to control thresholds for oilseed rape. Ultimately, both will help growers reduce losses.”
Amanda Bennett, research and knowledge transfer manager, HGCA

“A recent Harper Adams project found the beet cyst nematode is more widely distributed in oilseed rape than first thought. I’ll investigate the types of complexes formed and assess if there are any synergistic or antagonistic effects when both are present together. We’ll also aim to see how different levels of fungi or nematodes affect the formation of these disease complexes and ultimately the scale of crop yield losses.”

The outcome should help growers to manage the threat posed by the key pathogens or nematodes, he adds. Other than increasing the rotation gap between crops, options could include seed treatments, biological products, or even fumigants depending on registration.

Growing oilseed rape varieties resistant to damaging soil-borne diseases could be a sustainable solution if that resistance can’t easily be broken down, suggests Roy Kennedy of the University of Worcester. However, genetic resistance to soil-borne diseases hasn’t been the focus of plant breeding programmes, with one notable exception.

A couple of varieties on the HGCA Recommended List show some resistance to clubroot, or plasmodiophora brassicae. Growing these on infected land helps growers to mitigate against the yield penalty associated with the disease, he says.

But reducing the impact of the pathogen on yield doesn’t mean it will go away. Resting spores are the link between one crop and the next, and levels slowly increase, particularly under flood conditions, instigating future problems.

The pathogen lives for up to 18 years in soil. It is by detecting the spores that growers can confirm the level of threat. Prof Kennedy and his colleague, Alison Wakeham, are working on techniques to reliably forecast the field’s disease status.

“We hope assessing the risk will become easier and cheaper as the lab-based test is replaced with an antibody test much like the pregnancy test kit. We are re-calibrating and adjusting the thresholds for action in a kit we have developed for vegetable brassicas, for use in October in winter rape and April in spring rape. By this time next year, growers should be able to make more informed decisions for clubroot-infected land.”