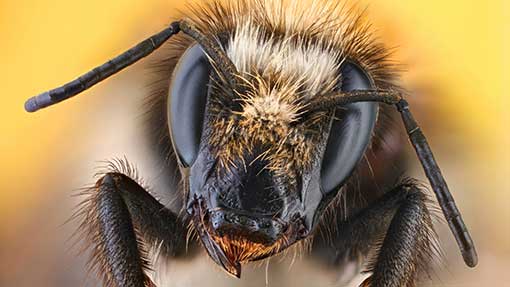 Scientists have called for more “field-realistic” research after another study linked neonicotinoid pesticides to a decline in bee health.

In the latest study, researchers at the University of Sussex and University of Stirling found exposure to imidacloprid reduced the amount of pollen collected by bumblebees by half.

For the study, the team fitted tiny electronic tags on bees to track their movements and each bee was weighed as they came in and out of the nest.

Imidacloprid, which was commonly used as seed coatings for UK crops, was one of three neonicotinoids banned by the EU in December for two years following research linking this class of pesticides to a decline in bee health.

However, manufacturers Bayer Crop Science and Syngenta have launched legal challenges against the ban.

They insist the targeted use of these crop protection products is safe and bee losses were caused by multiple factors, including the varroa mite, other viruses and changing habitats.

Prof Dave Goulson, the study’s senior author, said: “It is unclear what will happen when the moratorium expires, as the agrochemical companies that produce them are in a legal dispute with the EU over their decision. Our new study adds to the weight of evidence for making the ban permanent.”

Lynn Dicks, an ecologist at the University of Cambridge, said the latest study was “very important” because it provided further detail on how bumblebee foraging is made less efficient by exposure to imidacloprid.

“Pollen foraging is key for the development of young bumblebees, because pollen is the main protein source in their diet,” she added.

However, Dr Dicks said “important questions” about what a “field-realistic” dose was had not been settled and remained open.

“This study was not designed to address that – rather, it was designed to provide a mechanistic explanation for the drop in queen production measured in a previous study by the same group [the famous Whitehorn et al study], and so it uses the same levels as that study [0.7ppb in sugar water and 6ppb in pollen].

“These, particularly the pollen level, are at the upper end of what is found in the field, and likely to be higher than what bumblebee colonies [all the workers] are actually exposed to, because they don’t feed exclusively on oilseed rape.

“Average levels of another neonicotinoid, thiamethoxam, found in bumblebee-collected pollen by the DEFRA field study published last year were much lower than that (although not directly comparable, because it is a different chemical).”

Bayer, which manufactures imidacloprid, said real field studies, such as the study carried out by DEFRA in the autumn, would offer more realistic data on the true effect of these insecticides on bees.

But Friends of the Earth (FoE) insisted that the new research provided further evidence that pesticides are harming bees and underlines why the temporary ban on imidacloprid was so urgently needed.


“Bees and other pollinators play a crucial role in our food system. We cannot afford to continue bombarding them with a cocktail of toxic chemicals,” said FoE nature campaigner, Sandra Bell.


“The government’s imminent National Pollinator Strategy must tackle all the threats our bees face – including new ways to cut pesticide use.”