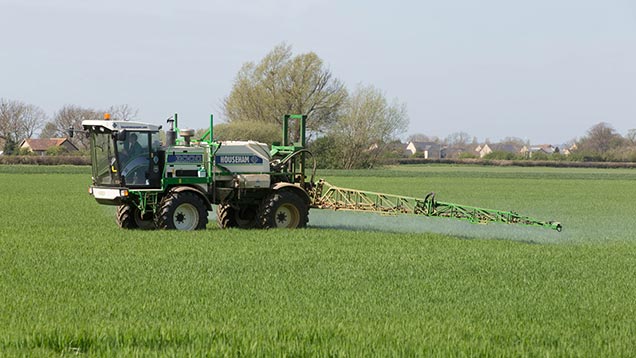 Dupont’s penthiopyrad is the most recent new-generation SDHI fungicide molecule to come to market, gaining UK approval in spring 2013.

The active is included in the product Vertisan for use in winter cereals and, more recently, in Refinzar, an SDHI/strobilurin co-formulation for controlling phoma in oilseed rape.

Independent research at the University of Nottingham has shown that applying the fungicide to both wheat and oilseed rape crops significantly increased root mass under controlled conditions.

Leading the research at the institution is Steve Rossall, who stumbled on the link between penthiopyrad and enhanced rooting when visiting Dupont’s European headquarters in the Alsace region of France, and subsequently set up his own trials in the UK to investigate the effect.

With rooting notoriously difficult and time-consuming to measure, he used hydroleca (clay pebbles) contained in 1m-long columns to propagate wheat seedlings, making it much easier to extract whole root systems for measurement.

Drip irrigation gave each plant an equal supply of water and nutrients and in the first experiment, penthiopyrad was applied at growth stage 14 and roots assessed five weeks later.

“We found there was a big effect on rooting in wheat from penthiopyrad applied at this early stage and not when using other SDHI fungicides,” said Prof Rossall at the annual Association of Independent Crop Consultants (AICC) conference near Towcester, Northamptonshire.

“But applying fungicide to wheat at growth stage 14 is not realistic in the field, so we repeated the experiment to see what happened when it was applied at GS32 (T1),” said Prof Rossall.

Roots were again harvested, but this time at mid-anthesis (GS65-69) and the penthiopyrad-treated plants had a significantly greater root mass than those receiving other treatments. “The results have been very consistant,” he added.

The initial experiments used the equivalent of 1 litre/ha. Subsequent trials used applications of commonly used field rates of 0.6, 0.8 and 1litre/ha.

From this, the team at Nottingham established the same effect could be achieved even at the lower rates.

“Within the range tested there was no response to dose, which makes us think the active ingredient is producing a genetic response in the plant, making it produce more roots,” said Prof Rossall.

With solid evidence that the effect could be achieved in wheat through the repeated experiments, the question was asked – could the same be achieved in oilseed rape?

OSR plants were then taken to the four- to five-leaf stage and treated with Refinzar, with roots assessed 24 days later.

The penthiopyrad-containing fungicide once again proved it significantly increased rooting compared with strobilurin Galileo and SDHI/azole co-formultion Propulse, which provided no root enhancement.

However, Prof Rossall did urge caution, as all the trials were carried out in controlled conditions and in the absence of disease, providing the plants with the optimum environment and without the stresses of a field situation.

“The plants were rather molly-coddled, so we aren’t claiming that the effect would be as profound out in the field, but there is definitely an effect,” he said.

In the 2013-14 growing season, 1m soil cores taken in a field-based penthiopyrad-treated oilseed rape crop showed there were more roots when assessed to a depth of 60cm.

“When exploring with a spade in the autumn you could see the difference and in a stressful season, when crops have been drought stressed or suffered from pigeon damage, a bigger root system could be beneficial,” said Prof Rossall.

The next step in the research is to explain how the effect is induced. Prof Rossall believes it could be down to increased auxin and cytokinin production – two plant substances that play an important role in root growth.

“We also have access to a computerised tomography (CT) scanner, so we’ll be able to assess roots as they grow in pots of soil and produce detailed images of what’s happening below ground,” he added.