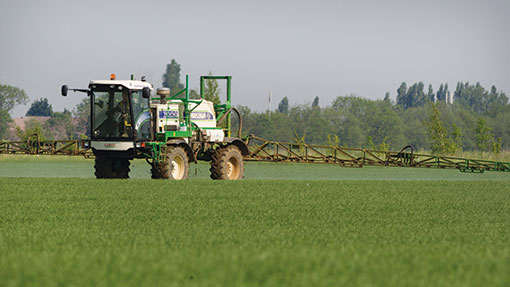 The first cases of disease resistance to SDHI fungicides in cereals have been found in the UK.

Results of European crop monitoring showed that partial resistance to net blotch in barley has been confirmed in the UK.

In 2012, two cases were detected in Germany, and by the end of the 2013 growing season mutations, which can confer a partial resistance to SDHIs, were common throughout continental Europe.

These mutations have spread rapidly in the course of a year and have been readily found through airborne spore monitoring in the UK.

Net blotch is common in winter barley crops this season, especially in southern England. The disease can manifest itself as brown stripes or netting on the leaf, or spotting.

If not properly controlled, net blotch can cause yield losses from 10% to 40% in barley, with a reduction in thousand grain weight.

John Peck, head of technical management at BASF, said: “This is the first example of disease resistance to SDHIs starting to appear in our cereal crops, with all SDHIs being cross-resistant, although no reports of field failure have been received.

“However, if this is not handled appropriately, we could start to see an effect on disease control.

“It is important that growers maintain good resistance management strategies in their fungicide programme, which means using no more than two SDHI applications a crop in accordance with Fungicide Resistance Action Committee guidance.”

“It is important that growers maintain good resistance management strategies in their fungicide programme, which means using no more than two SDHI applications a crop in accordance with Fungicide Resistance Action Committee guidance.”
John Peck, head of technical management at BASF

Fiona Burnett, crop protection lead at Scotland’s Rural College, said: “The SDHI fungicides have always been regarded as being at moderate or high risk of resistance and this is the first example in a cereal pathogen.

“It is early days, but it is likely the reduction in efficacy will be relatively small and good control will still be achievable in the field. However, it further underlines the need for careful stewardship in barley [and all crops] this season.

“This, in practice, means mixing SDHI fungicides with robust and balanced doses of azole fungicide and making use of multi-site fungicides and of alternative modes of action across fungicide programmes.”

Bill Clark, commercial technical director at crop consultant NIAB TAG, said: “It is a serious issue, but we have other chemistry to mask it for net blotch control.

“But if this number of isolates [cases] came through in septoria, it would be a real serious concern.”