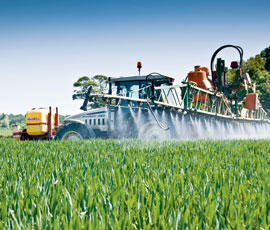 With two new fungicides competing for a place in this season’s flag leaf sprays, Louise Impey finds out if there’s going to be a winner

“They are a step forward,” he stresses. “In protectant mode, they are both excellent and you really can’t separate them.”

But in an eradicant situation, the HGCA data indicates that Bayer’s Aviator Xpro (bixafen+ prothioconazole) is slightly stronger than Syngenta’s Seguris (isopyrazam + epoxiconazole), he adds, with ADAS work also supporting the curative activity of Aviator Xpro.

“This mixture provides around two extra days of kick-back activity on latent infection of septoria compared with prothioconazole alone,” he confirms.

“However, what we don’t know yet is whether that extra curative activity will be needed this season,” he says. “Up until now, it’s been very dry. But that could all change if we get wet weather at around the T1 timing.”

For rust control, it’s a different scenario. “The rusts are not as difficult to control. There are more weapons to use and less resistance to them. The isopyrazam molecule looks more active on yellow rust than bixafen, but both two SDHIs are an additional mode of action, rather than an out and out improvement over triazole standards.”

Their efficacy on septoria is the same as can be achieved with Brutus, which has a hefty loading of triazole, notes Mr Blake. “But where they differ from Brutus is the yield advantage that they offer over and above that of the triazole-based product. In the HGCA work, that average extra yield was 0.35t/ha.”

What gives this additional yield is still open to debate, he continues. “It’s a physiology versus pathology discussion. It could come from superior disease control or be due to something else.

“What we do know is the effects are more than those that can be attributed to disease control alone. The biggest yield responses come from the highest disease pressure sites and do seem to be related to yield potential.”

Both Seguris and Aviator Xpro have a particular place at T2, believes Mr Blake.

“Between 60-70% of the light intercepted for grain filling is done by leaf 1 and 2,” he explains. “The T2 application is affecting the leaves that are most important for this process and the SDHIs have a particular strength in prolonging green leaf area. So there’s a good reason why they should be used at the flag leaf timing.”

The fact that they offer a new mode of action for septoria control is relevant too, he says. “We’ve been heavily dependent on the triazoles for a long time. These new SDHIs will help to strengthen T2 disease control.”

Other lessons learned from the HGCA work is that the new choices show good rate responses. Growers will not be able to get away with using half rates, as they won’t get the yield responses, he warns.

“You should be applying three-quarters to full rates of these SDHI/triazole mixtures, to ensure sufficient triazole is applied and crops still get a two-thirds to three-quarters rate of triazole at T2,” advises Mr Blake.

Furthermore, both products have shown to have good persistency, he adds. “That’s relevant, because it could have an impact on T3 requirements.”

As the T3 spray has three functions – foliar disease top up, brown rust control and fusarium management – product selection for this timing is important. “It’s not possible to find a single active ingredient which will do all of these three jobs.

“So if you’ve had the additional septoria persistency at T2 from an SDHI, this won’t be as important at T3. It widens the options and lets you concentrate on the other two requirements.”

Mr Blake’s final remarks on the SHDIs are their requirement for a tank-mix partner at T2. “Both of the new fungicides are formulated with triazoles, so they are already included. But the question that growers will want answered is whether to include chlorothalonil or not.”

From a resistance point of view, the inclusion of chlorothalonil is a good thing, he remarks. “The SDHIs rely on a single mode of action, so are more likely to develop resistance. Chlorothalonil would help to prolong their useful life.”

But there are concerns that chlorothalonil can be antagonistic, especially where curative activity is required, causing disease control to be compromised.

“Until we know more about this, the solution seems to be to include chlorothalonil where you are applying the T2 spray in protectant situations, but to omit it in a highly curative situation.”

A general lack of experience with both of the new fungicides in high disease situations means that everyone is working in the dark to some extent this season, says David Ellerton of Hutchinsons.

“The last two years have been low disease years,” he points out. “That means this season will be a valuable learning experience in how to get the best from the new products. We can’t be definitive yet.”

Limited supplies of both fungicides mean that it won’t be possible to use them on everything, he adds. “2011 is going to be a look-see year. It’s worth trying them out on high disease-risk fields to see how you get on.”

What he is confident about is that both products are extremely strong on septoria. “In high disease pressure situations, there are definite benefits from their use. Septoria is a key position.”

He has looked at the HGCA work and points out that it wasn’t until 2010 that the actual formulated products were compared. “Before that, they were using mixtures, which isn’t a true comparison. And as disease levels were at an all-time low last year, it’s not really possible to pull the two fungicides apart.”

His feeling is that they should be used in high yield potential situations, where septoria pressure is also high.

“However, if we get a repeat of last year’s low disease pressure, we might not see any clear differences. There were drought tolerance benefits observed and the crops were able to hang on a bit longer, but the drought was so severe in some cases that these effects didn’t always translate into a yield response.”

Neither fungicide should be used below 75-80% dose, he advises. “High doses are where you get the yield benefit. Below this, you lose any advantage that the new chemistry has to offer.”

Dr Ellerton also advises growers to stick with the traditional T2 timing where possible. “Apply it at flag leaf emerged. You may get a bit more flexibility with the T3 treatment as a result, due to the extra persistence of the SDHIs, which could give some leeway. But don’t count on this happening.”

At T2, Seguris is stronger in severe rust situations than Aviator, he believes. “However there are variations of the bixafen-based fungicide with extra active ingredients, such as tebuconazole, to cover any rust weaknesses.”

He points out that Seguris doesn’t have any significant fusarium activity, giving Aviator the edge where fusarium control is needed. “At this stage, it appears that Aviator is also better on eyespot due to its prothioconazole component. Surprisingly, both products have shown useful levels of mildew control in a limited number of trials.”

The use of chlorothalonil at T2 with the SDHIs is complex, especially as the two manufacturers have taken different stances, he continues.

“Where possible, chlorothalonil should be used at T0 and/or T1 for its protectant benefits on septoria,” he recommends. “If that’s taken place, you shouldn’t need it at T2. But if you haven’t managed to include it up until T2, then you might want to put some in.”

Syngenta has seen benefits from its inclusion in high pressure septoria situations, but Bayer has reported negative effects and is advising against its use, he says.

Dr Ellerton’s final point is to stress the importance of the new chemical group. “The SDHIs are very significant as they are a different mode of action to triazoles. It’s essential that growers use them correctly to optimise their yield effects.

“It’s crucial that they are used as part of an anti-resistance strategy, both to protect other modes of action and to protect the SDHIs themselves from the risk of resistance developing.”