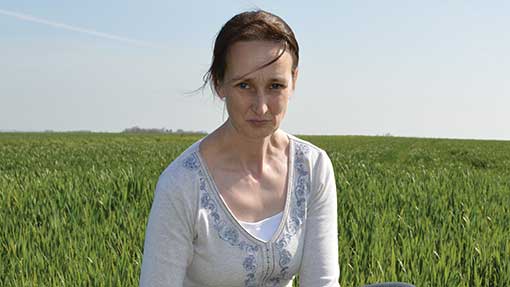 An increase in yields is being seen from using SDHI fungicides beyond controlling diseases. David Jones looks at what is behind this beneficial impact on winter wheat crops.

New SDHI fungicides, such as fluxapyroxad as used in Adexar, could increase winter wheat yields by up to 1t/ha in addition to their effect on controlling disease.

This added yield boost is likely to come for a range of factors such as keeping the crop greener for longer and increasing its photosynthetic rate.

Julie Smith (pictured), plant pathologist at crop scientists group ADAS, has recorded these yield-boosting bonuses over a number of years after stripping out any fungicidal effect.

She used the SDHI/triazole fungicide product Adexar in Cambridgeshire and Herefordshire, and saw the yield on winter wheat crops rise to just over 8t/ha.

“After treatment with the SDHI, crops have a larger healthier canopy which persists for longer,” Ms Smith says.

“They also are more efficient at converting light energy into dry matter yield whilst reduced water loss from the leaf surface,” she adds.

The SDHI treatment creates a larger post-flowering green leaf canopy in winter wheat and can delay crop senescence by 4-5 days, which extends the growing season and so helps boost yield.

The SDHI product also had a small but consistent effect on partially closing the stomata on the top four leaves of winter wheat plants.

This limits water loss from the plants and , with reduced moisture stress as a result the plants can increase their rate of photosynthesis.

Under field conditions, Ms Smith says there is a significant improvement in water efficiency in the wheat plants, and this would be particularly useful in droughty conditions.

She says the increase in this photosynthetic rate sees the green matter in the plants working harder to convert light energy into dry matter and therefore yield.

There are also signs that the SDHI treatment can reduce cell damage which is not visible to the naked eye, and hence this also could well help increase yield.

Her results come from a number of trials comparing the straight triazole fungicide Ignite applied at both the T1 and T2 timings with the SDHI-triazole product Adexar also at T1 and T2.

Ms Smith conducted the trials on winter wheat crops with disease present in order to pick up and separate out the non-disease control effects of the SDHI treatment.

She says the 1t/ha yield difference was clearly seen between the two fungicide programmes at ADAS Boxworth, just west of Cambridge, and at ADAS Rosemaund just north of Hereford.

“Our work has confirmed that some of these factors are directly affecting the host wheat plant and not due to the control of visible disease symptoms,” she says.

Ms Smith concludes that the yield increase comes about from a rise in grain numbers and also in grain size in the winter wheat crops.

She has not seen the same significant yield rise using the older SDHI product boscalid, while Ms Smith has not conducted trial work on other new SDHIs such as bixafen, isopyrazam and penthiopyrad.

SDHIs, or succinate dehydrogenase inhibitors, work by inhibiting fungal respiration and are more effective at controlling diseases than older products. To try and prevent resistance building up against them, they must be used only twice in a season and in conjunction with another fungicide, such as a triazole, with a different mode of action.

The first of these new generation of SDHIs, Bayer’s Aviator and Syngenta’s Seguris, were launched in 2011 for use on cereals in Britain and were followed the next year by BASF’s Adexar. These are all SDHI-triazole mixes although Syngenta does sell its SDHI isopyrazam as a straight product Zulu. and BASF its straight SDHI fluxopyraxad as Imtrex.

Du Pont launched its Vertisan as a straight SDHI (penthiopyrad) and also as a mix with chlorothalonil called Treoris in March 2013.