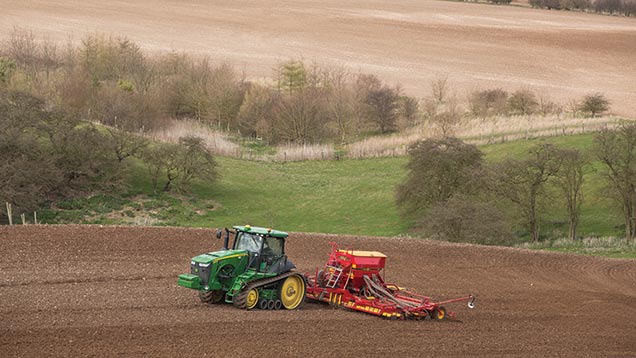 Spring barley plantings are set to rise by 9% this year to 713,000ha, according to the HGCA’s early-bird survey.

Following last year’s bumper yields and superb quality, what is that likely to mean for premiums for harvest 2015?

According to Graham Redman, author of the John Nix pocketbook, spring malting barley should return an average gross margin of £526/ha, down from the previous year.

This is based on forecast figures including a grain market price of £152/t, yield of 5.45t/ha and variable costs of £302/ha.

Fortunately for growers, there are a number of different marketing options available, according to their attitude to risk.

For inexperienced malting barley growers, the best option is likely to be a non-defaultable pool, says Stuart Shand, trading director at Gleadell Agriculture.

“If you don’t want the risk of failing to reach malting quality, then either choose a pool or a contract that fixes the month of movement, but allows you to agree the base price and premium at separate times, once you know what quality you’ve got,” he says.

Other marketing alternatives include fixing the base price and agreeing premiums over feed wheat futures.

“The best price I’ve heard for Tipple and Propino so far is £150/t ex-farm for October-December movement, based on maximum 1.85% nitrogen for brewing (the primary export and domestic market in England),” he adds.

“We believe the distilling market is declining – there are fewer contracts available and premiums have been cut back,” says Mr Shand.

“If you are a new malting barley grower, I’d keep away from distilling varieties if I were you, as you’ll have a lower yield and greater risk of not getting the low-nitrogen premium,” he adds.

Variety choice will be critical, so growers must identify a market before choosing what to plant. “With lots of new varieties on offer, growing the right variety for your location is more important than ever,” says Mr Shand.

For brewing, the Null-Lox varieties are extremely popular with domestic brewers and exporters, as they feature a trait that keeps beer fresher for longer.

“We’re paying £15/t to £20/t over wheat futures, based on maximum 1.92% nitrogen for domestic homes or 1.85% for export. Unfortunately, the contracts are all filled, and we have a waiting list,” says Mr Shand.

Although Tipple is becoming outclassed in the field, it is still popular among maltsters. “There will be some homes in East Anglia, but the main market will be export,” he says.

Propino is now the number-one choice for domestic and overseas brewers, and will therefore be the safest bet for most barley growers in England.

“Sanette is a new variety that’s awaiting full IBD (Institute of Brewing and Distilling) approval – I wouldn’t advise growing it for malting unless you have a contract,” says Mr Shand.

“Irina looks like it will become the main brewing variety in Europe – although the IBD is testing it here we’ve already got export contracts,” he adds.

Planet also looks promising, but is under trial for 2015. “It’s got high yields, as have Irina, Sanette and Odyssey, so those would be good choices if you’re really growing for yield,” he adds.

Although some varieties – such as Odyssey and Concerto – have dual approval for use in brewing and distilling, it’s essential that growers identify a target market and ideally secure an appropriate contract.

“We’re still awaiting distilling results for Odyssey, so while we have distilling contracts for Concerto, we don’t have any for Odyssey at the moment,” says Mr Shand.

Despite all the varieties on offer, it is more efficient for buyers to deal with a limited number of them, says Mike Dagg, raw materials buyer at Simpsons Malt.

“The primary variety for us will be Concerto. Odyssey is the one that is coming up behind it. Last year was our last one for Optic – it is not on our wish list for 2015. The fewer varieties we have to handle at harvest, the more efficient we can be,” he says.

As the primary market in Scotland is distilling, there is very little demand for brewing varieties north of the border, according to Trevor Harriman, general manager at Scotgrain.

“We’re just formulating our contracts, and they will be similar to last year, including min-max prices, harvest averages, and futures-related. Premiums are at about £20/t – but be careful what specification you are agreeing to, as they vary,” he says.

With Concerto taking the lion’s share of the Scottish market, there will only be a little room for Optic, Belgravia and Moonshine, warns Simon Barry, chief executive at Highland Grain.

“Some varieties like Odyssey and Propino probably won’t be contracted this year because they had a few problems last year, especially in the north of Scotland, where there was a lot of rain in mid-August,” he says.

“We haven’t really got any new contracts out there – we’re into the final year of the three-year contracts that farmers signed up to two years ago,” says Mr Barry.

Premiums are likely to remain at £20/t to £25/t over wheat futures, and growers should not take too great a risk in exposing themselves to the market.

“Demand is healthy but if there is oversupply then spot premiums are likely to be pretty grim,” he says.

However, the impact of the three-cropping rule in Scotland is hard to forecast.

“In England there is likely to be an increase in spring barley acreage, but as Scotland is dominated by spring barley we may see a fall in acreage. It’s a difficult one to predict,” adds Mr Barry.