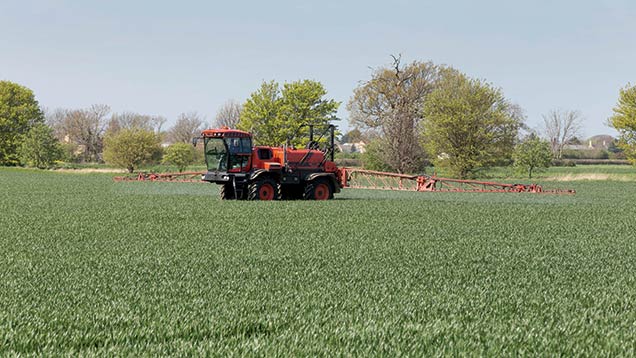 Seasonal effects, rather than resistance shifts, are thought to be behind some of the unprecedented differences observed in fungicide performance in last season’s trials.

According to Stuart Knight, director of crops and agronomy at Niab Tag, the 2014 results from the HGCA-funded fungicide performance trials shouldn’t be considered in isolation.

“A look at the data across the past three years is a better indication of how the various fungicides will perform and what level of disease control you can expect to get from them,” he says.

That’s because there was an unexpected gap between the top two azoles, prothioconazole and epoxiconazole, when used to protect against septoria, with Proline giving a stronger performance over the last year, he acknowledges.

“There was an advantage from Proline over Ignite in 2014 in a protectant situation,” says Mr Knight. “That came as a surprise and we believe it was due to seasonal variation, rather than anything more concerning.”

Proline also gave a better yield response than Ignite when a single T2 spray for septoria was applied, he adds. “There seems to have been something about the 2014 season that has suited Proline more than Ignite, but we’re not sure what that was.”

Previously, the two products have given very similar results, he says. “We have seen poorer control coming from one of them before, only for the situation to be reversed the following year. So we’re confident that there hasn’t been a shift in septoria sensitivity to epoxiconazole or any decline in its efficacy.”

Indeed, when the eradicant activity of the two fungicides was tested, they gave identical results.

“We’ve also continued to monitor the shift in azole activity and both products are showing the same rate of decline.”

The tremendous disease pressure experienced in 2014 gave some very good protectant and eradicant data, as well as exceptional yield responses, highlights Mr Knight. “There was a 4t/ha yield response from a single T2 spray.”

Starting with the six septoria trials carried out in 2014, he points out that the three SDHI co-formulations – Adexar, Aviator and Vertisan plus Ignite – were very close in a protectant situation, with Seguris also comparing favourably.

The two straight SDHIs – Imtrex and Vertisan – gave comparable results in a protectant situation. “But in an eradicant scenario, Imtrex showed an advantage over Vertisan. And that difference was clear to see in the yield response results, with Imtrex coming out on top.”

Seeing a big yield response of 4t/ha after single spray highlights the importance of planning an effective wheat disease control strategy. The modules in the Fungicide Management course focus on planning and implementing wheat fungicide programmes – and includes specific advice on targeting key diseases and designing programmes for barley. Take the test and earn cpd points

That’s because Vertisan is not as persistent, explains Mr Knight, so there’s a decline in green leaf area when compared with others.

He stresses that both SDHIs should always be used in mixes with effective partners.

Also included in the protectant trials work were the two multisite protectants Bravo and Phoenix. While Phoenix gave a reasonable level of control, it wasn’t at the Bravo level.

Moving on to rust, Mr Knight highlights that the star of brown rust control is pyraclostrobin, although the SDHI co-formulations all did a very good job.

“There’s no brown rust control from Phoenix, but it does have a low level of activity on yellow rust. However, neither disease is on the label.”

With yellow rust, the SDHIs are weaker than they are on brown rust. “The strength of epoxiconazole came through, and pyraclostrobin is also very good. SDHI mixes containing epoxiconazole gave better performance, both in 2014 and across three years, due to its better efficacy on rusts.

More differentiation was evident between the SDHI actives in barley than it was in wheat, reports Mr Knight.

“Imtrex is a good package,” he says. “It gave especially good results on rhynchosporium and net blotch.”

Of the others, Zulu proved effective on brown rust, but was less active on rhynchosporium, while Vertisan was weaker on net blotch than Imtrex.

“But Adexar is matching it now, so there are choices for growers. However, they should be wary of relying too much on SDHI/azole mixes – there are other mixtures available, such as Bontima.”

Prothioconazole continues to perform well on barley, he adds. “Results have been consistent with those achieved previously, so it is a very good choice. It will control mildew, too.”

Mr Knight’salso says pyraclostrobin is less effective against net blotch, due to a mutation causing partial resistance, but is still performing well against brown rust.