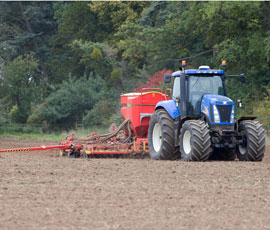 The loss of commercial and seed hybrid barley crops to winter kill across Europe earlier this year is expected to have an effect on winter barley seed supply this autumn, warns the seed trade.

The resulting reduced availability of the high-yielding hybrid varieties – Volume, Element and Bamboo – is likely to temporarily disturb the market and could see growers having to accept alternative choices.

As a result, a run on conventional six-row varieties in Scotland – where hybrids have been popular – is already being reported, with stocks of both KWS Meridian and Escadre selling out after the news that there was no guarantee of hybrid barley supply reaching growers.

Speaking to your supplier as soon as possible about alternatives is a good idea, say seed merchants, in case there’s a need to change track and secure stocks of other varieties. Most merchants report they are still waiting to hear how much their seed allocation has been affected.

“The situation is changing constantly, as you would expect with seed production, and field inspections are still taking place,” admits Robert Hiles of Syngenta. “Hybrid production is done on a European basis – once the entire harvest is completed, we agree on the destination for the seed.”

While crops in the UK and France were unscathed, there was a huge amount of winter kill in Germany, he says. “That’s why we alerted our distributors to a significant reduction in seed back in March. We have been in a dialogue with them as the situation has unfolded.”

Volume is the variety most affected, he confirms.

Fortunately, production for next year for all the hybrid varieties is secure, he adds. “This is a blip, rather than a failure of the system. And we are still hopeful we will be able to meet a large proportion of requirements.”

Otherwise, among the non-hybrid winter barleys, newcomer SY Venture, a malting barley, has also sold out, reports Lee Bennett of Openfield. “There’s a great deal of end-user interest in it, so the seed has gone for this year.

“It’s got through the Institute Brewing Distilling system and has been granted provisional approval for brewing, so it’s on its way to becoming a major variety.”

The popular two-row feed barley, KWS Cassia, will continue its march, he predicts. “It already has a 35% market share and has done well across all regions. It may not have the headline yield of six-rows, but it has grower appeal.”

He suggests Retriever will also sell where alternatives aren’t available.

“Varieties like Florentine could pick up too, given the seed supply situation,” he says. “It’s only slightly behind on yield.”

Florentine is particularly well suited to the South West, says Paul Taylor of Pearce Seeds in Dorset. Its resistance to the wet weather diseases makes quite a difference in the region and gave it the highest yields in the company’s trials last year, he says.

“It’s our top-selling winter barley and accounts for about 30% of our sales. Not only does it have the disease ratings we need, it also has good straw characteristics. That’s another bonus in this part of the country, as straw has value.”

Early indications also suggest it has a high hot water extract, a key requirement for malting.

“If it gets through the all-important malting tests, it will deserve a closer look,” says Barry Barker of Agrii. “We’re seeing some great advances in barley breeding, both in malting and feed.”

Otherwise, two feed types from KWS look likely to raise the bar and could challenge the hybrids on output.

“KWS Discovery and KWS Glacier are looking good,” he adds. “Their yield levels put them in a different category to the existing two-rows. At the moment, they are the next step forward.”

That’s a view shared by Adam Christie of Scottish Agronomy, who agrees they are exciting developments. “They’re moving the game on.”

While harvest 2012 results are yet to come in, both varieties could give as much 10% more yield when compared with Saffron, says breeder KWS.