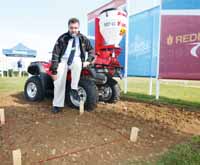 Using seed treated with Redigo Deter (clothianidin), and following up with a well-timed methiocarb slug pellet application could be the only slug control many wheat crops require, according to Adrian Cottey, Bayer CropScience’s seed treatment manager.

“Around 40% of wheat crops are now treated with Deter, and growers often tell us they use less slug pellets when they have used Deter,” he explained.

“Logically, this doesn’t make sense, as Deter doesn’t kill slugs, but we think if you get 20-25% more plants established where there is a slug problem, it leads to farmers making different decisions about crop management – doing less revenge pelleting.”

Bayer trials had proved that a single treatment of Draza Forte (methiocarb), applied at the right time, could be the only slug pellet treatment required, he said. “It is because of the better pellet quality and higher activity with Draza. But the product is not often used that way. Most growers use metaldehyde first and then use methiocarb if it fails.”

But if growers used Draza Forte as the first treatment, where they had used Deter-treated seed, rather than metaldehyde, it could prevent the need for subsequent applications, and reduce metaldehyde applications, he suggested.