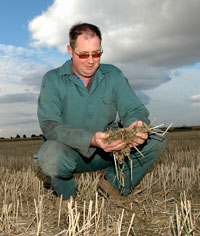 Few wheat growers rely on one market alone. But for Martin Whitlock from Huntingdon, an Openfield/Warburtons milling contract, relaunched as a five-year deal at Cereals 2010, has been a significant part of his business for seven years.

“It’s central to our farm’s success,” says Mr Whitlock. In years that wheat averaged only £60/t, the contract secured him £90/t. “Based on this commitment I’ll be taking up the new five-year contract.”

The key to meeting Warburtons’ particular needs is ensuring the crop gets exactly what it needs in field and store, he explains.

Highly resistant blackgrass is the main agronomy problem – the farm has hosted crop protection trials for 10 years, many aimed at finding the best ways to tackle it. If left untreated, populations would reach up to 1200 plants/sq m, making wheat production impossible.

Mr Whitlock’s blackgrass control strategy starts after harvest with a stale seed-bed to encourage chitting. He then sprays glyphosate before drilling which he delays until October.

To avoid reintroducing seed from depth he practises min-till using a Kongskilde Delta, any topsoil restructuring being via subsoiler before establishing the rape. His sowing target is a “fairly robust” 350 seeds/sq m to help smother the blackgrass.

All wheats get pre-emergence herbicide, last autumn it was a Liberator (diflufenican + flufenacet)/Defy (prosulfocarb) mix as it produced best results in the trials.

Atlantis (iodosulfuron + mesosulfuron) follows – this season in the spring after the wet and windy autumn. “Unfortunately its efficiency is falling, which is why a robust pre-em herbicide is so important,” he says.

“Blackgrass control has been difficult this season as we couldn’t spray in the autumn, and our third wheats have suffered most.”

Nitrogen use is based on N-Min analyses, and composted green waste applied after the rape and second wheats provides more nutrients and improves soil structure.

“Last year the compost supplied 28 units/acre of nitrogen, 10 of phosporus and 21 of potassium. We’d use more if we could, if it wasn’t for Nitrate Vulnerable Zone restrictions,” says Mr Whitlock. “It creates lovely seed-beds.”

All bagged nitrogen – as ammonium nitrate at up to 230kg/ha on third wheats – goes on relatively late to ensure it gets into the grain to produce the protein Warburtons requires.

When Hereward is ready to cut it needs getting in quickly or Hagbergs soon suffer. The farm’s relatively large NH TX36 combine aims to achieve this in five to six days. “We try to avoid cutting above 17% moisture as we only have mobile drier,” says Mr Whitlock.

Getting grain to below 10C is vital to preserve quality in the farm’s on-floor store, thermostatically controlled pedestal fans being used to push in cold air if temperatures start to rise.

Last year, all his Hereward was gone before Christmas, but living on site only 12-15 miles from Warburtons’ mills at Peterborough and Wellingborough he is flexible over deliveries. “Our view is that if they need grain quickly, we’ll deliver it.”

All his wheat is sold by Openfield through an annual pool at Warburtons’ call. During 2009, the contract delivered an average of £145/t, providing a good gross margin.

The Whitlocks’ operation is a family concern, Mr Martin’s father, Tony, doing all the paperwork that scored highly in the Golden Loaf assessment (see panel).

According to Openfield’s Graham Lacey, the Whitlocks’ performance was especially notable given that 2008 produced one of the poorest harvests in living memory. “They and the other Openfield growers rose to the challenge and produced the highest ever tonnage for Warburtons.”

In gaining it he beat 250 other Openfield members producing about 160,000t a year of wheat for the baker.

The companies have a long-term supply agreement, each farm supplier being scored on performance across six categories, including grain quality.