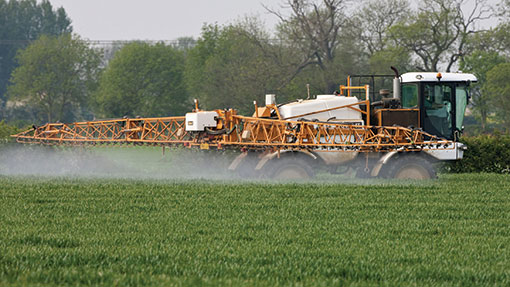 Recent rain will heighten the threat from septoria to winter wheat crops and growers may need an extra fungicide spray to keep this disease at bay.

The mild winter has left plenty of inoculum of wheat’s most yield-sapping disease and a turn to wetter weather will boost the spread of septoria.

Agronomists are reporting more septoria than for a number of years, which may be a threat to the national wheat crop, which could be the highest for six years.

Heavy rainfall in April and May helps encourage the disease as rain splash causes septoria to move up from the lower leaves to the key yield-producing upper leaves.

He is concerned that T1 fungicide sprays applied in late April to protect leaf three of the wheat plant will not persist to protect new emerging leaves before a T2 spray goes on in late May.

“Septoria was always going to be the number one disease with plenty of early-drilled crops, wet weather and a mild winter,” he adds.

The need is to stop infection on leaf three spreading to leaf two and then to leaf one, or the flag leaf, in any spell of wet weather.

He suggests a short-term fix may be needed to protect leaf two, and advises a triazole/chlorothalonil spray could be needed as a intermediate T1.5 spray.

“It’s brewing up to be a bad septoria year.”
Bill Clark, NIAB Tag

This will protect leaf two and make the timing of the key T2 flag-leaf spray, usually a SDHI/triazole product, less critical.

Christine Lilly, technical manager at distributor Frontier, reports a lot more septoria in Lincolnshire than has been seen for a number of years, and also says growers need to think about a T1.5.

“Leaves are emerging quickly but a spell of cold weather may slow this down and growers should not extend spray intervals much beyond three-and-a-half weeks,” says Ms Lilly.

Philip Bounds, research scientist at ADAS, based in Herefordshire, says there are exceptionally high levels of septoria on the lower leaves of early-sown crops in his wetter western region.

“The showery and wet weather over the past seven to 10 days will have encouraged the spread of septoria tritici on to the upper leaves,” he says.

If T1 sprays were applied too early and before the emergence of leaf three, then the interval to the T2 spray to protect the flag leaf will be stretched, he warns.

The UK wheat area this season is set to rebound strongly after good autumn drilling conditions with grain traders putting the UK wheat area at about 1.95m hectares to give a crop of more than 15m tonnes.