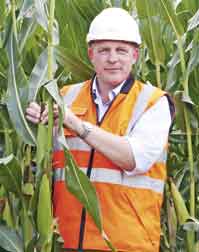 With the potential to generate 15GWh of electricity each year, the UK’s first large scale anaerobic digester to run purely on energy crops is nearing full production.

The new digester, however, based at Stoke Bardolph, Nottinghamshire, is in another league. Work started in the spring of 2009 with the construction of five large silage clamps – each of which can hold about 7500t of ensiled maize or whole crop wheat.

These were required to store the maize and wheat harvested last year to provide “fuel” for the digester on its completion, which was in May this year.

Maize is grown on the 700ha (1750 acres) of land adjacent to the Stoke Bardolph site – land which has, over the years, received liberal helpings of sewage sludge and, as a result, is high in potash. 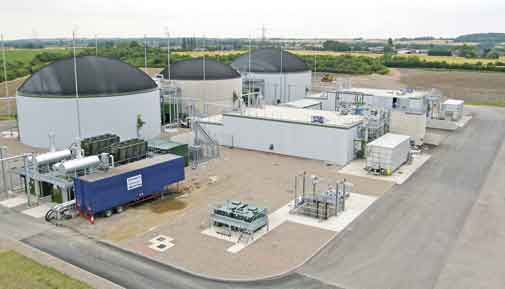 Harvested by Severn Trent’s own self-propelled forage harvester, a Claas Jaguar 870 complete with eight-row header, the maize is cut to a much shorter length than for conventional feed crops.

Energy crop manager John Jackson explains. “We need to maximise the surface area of the chopped maize to provide ample area for the bacteria employed in the methane production process to do their work,” he says. “We aim to chop down to a length of about 6mm.”

The digester itself draws on German technology and was designed by specialist company Schmack Biogas. It comprises four pre-fermentation units (primary digesters) from which material is fed into two secondary fermentation units and then finally to a single container where the last of the methane is extracted.

After this, the digestate is ejected and, having a useful NPK analysis, is spread back on the land as fertiliser. Annual production of digestate is expected to be 26,000 cu m of liquid and 5000t of solids.

So, when up and running, each day will see about 100t of maize silage being loaded into large hoppers which then slowly deliver the crop to four primary digesters – each digester with a capacity of 550 cu m. Inside, agitation is provided by a rotor having hot water pumped through its main shaft to maintain the temperature of the mix at the required 42C.

About 30% of the gas is collected from the primary digester, with the bulk being collected after the mix has passed into the two secondary fermenters which have a capacity of 6600 cu m. A continual process, a mass of sensors and gauges ensure temperatures, feed intakes, mix movements and gas production are all controlled with almost clinical precision.

It takes up to 90 days for material to pass through the digestion process from start to finish.

But it is in the generator room where everything comes together. Methane is piped to two enormous Austrian-built Jenbacher Type 2(320) engines. Each uses its 60 litre, V-20 cylinder arrangement to produce 1500hp and power a generator capable of 1MW output.

Set to run at a sedate 1500rpm, these engines are designed to operate non-stop for months at a time – service intervals are few and far between and, if it is just a scheduled oil and filter change, downtime is only a matter of a few hours.

“When these engines stop we stop earning money,” points out Mr Jackson.

Engines also produce heat, lots of it, and this is used not only to ensure correct temperatures in the digestion process but could be sold off for use in, say, a commercial greenhouse complex.

At the moment the Stoke Bardolph digester is being commissioned – a lengthy process which, started in May, will take until December to complete.

Far from being a case of loading in a few tonnes of maize, these digesters need a starter diet of 600t of poultry manure, 5800t of cattle slurry and 3000t of digested sewage sludge to get the right type of bacteria working correctly.

“We also had to hire in a boiler unit which could provide the heat to bring the material up to temperature,” explains Mr Jackson. “It’s so important to get the commissioning right – if it all goes wrong the thought of having to dig out thousands of tonnes of muck is too much to contemplate.

“The commissioning process is all about having a programmed sequence which, through the establishment of the correct bacteria, allows the gradual introduction of increasing amounts of maize,” he says.

By early September there should be sufficient gas to see one engine working at 100%, although in reality this gas will be shared between the two engines so that they both work at 50%.

Come the end of December maize feed should be total and output sufficient to see 100% production from both engines.

“We’ve still a lot to learn but I think we are well on track,” says Mr Jackson. “All being well, we could see a payback within 10 years – it depends on the price of electricity.”