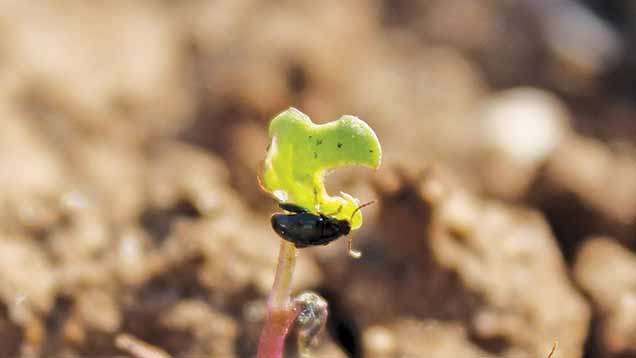 With insecticide resistance rising and migration peaking this week, the only respite from the onslaught of attacks lies with small areas of rapeseed treated with neonicotinoid seed dressings.

“The difference between the crops is like night and day. In the 20 years I have been growing the crop I have never seen flea beetle pressure like this. It is getting really tough,” he tells Farmers Weekly.

With no guarantee that growers will have even restricted access to neonics again next year, Mr Offord says the future for growing rapeseed looks bleak.

“If we aren’t able to use neonics again next year, and as a result we start to see yields getting as low as 4t/ha, then we will have to review our options,” he says.

Average yields were 4.75t/ha at Mr Offord’s Clopton Green Farm on the the outskirts of Rattlesden, some 10 miles south-east of Bury St Edmunds, down from 5t/ha at harvest 2014.

“Before the ban we had neonic-treated seed for five or six years and having this product available to us helped to steady the ups and downs in yields from year to year. It definitely gives us a big uplift in performance and really helps with the early vigour of the crop,” he says.

A European Union ban was put on neonic seed treatments for oilseed rape in December 2013 after perceived fears that the pesticides were harmful to bees.

An emergency application to use neonics was approved this July, but only for 5% of the UK crop area – or about 30,000ha – and only for use in the flea beetle hotspot counties of Bedfordshire, Cambridgeshire, Hertfordshire and Suffolk.

The seed dressings approved for use were Bayer CropScience’s Modesto (clothianidin) and Syngenta’s Cruiser (thiamethoxam).

His Cruiser-treated Nikita was drilled a day after the untreated hybrid and yet the contrast between the two is stark, both in terms of establishment growth and flea beetle damage.

“Despite the hybrid’s claimed vigour the flea beetle damage has really knocked it back. We haven’t sprayed the neonic-treated crop at all and there is some evidence of plant grazing but that is expected because the flea beetle has to ingest some of the plant for to chemical to kill it,” he says.

Cold and wet weather in the two weeks after drilling meant flea beetle activity was low but from the start of September the pressure has been immense, with peak migration hit by the end of the month.

“Now we’ve had more sun and the land has dried up, the crop is starting to pull away but the damage is done and I expect to get between 50-60% establishment on that field of the untreated hybrid variety,” he says.

Mr Offord adds the farm has developed an effective system for drilling the crop to help with the high flea beetle pressure seen in his part of Suffolk and where there is 60% flea beetle resistance to pyrethroids.

“This year we double rolled the seed-beds and experience shows that works well on this heavy land because it closes it up more and gives the flea beetles fewer places to hide and shelter,” he says.

Flea beetles are targeted with sprays as soon as it gets dark, but before the dew comes because the insecticides are contact-acting and the pests mostly come out at night to feed. He has sprayed his non-seed treated crop three times so far.

“Despite all of this we are still seeing feeding now but it has slowed the flea beetle down a bit. The main issue with the damage to crops is the loss of vigour – it really knocks the plants for six. Where there’s heavy grazing it is causing plant death,” he adds.

After battling to save his oilseed rape and forage rape crop from flea beetle damage a year ago, Cereals 2016 host farmer Robert Law says the problem has intensified with some of his fields facing a complete wipe out.

“We are getting absolutely hammered here, it is a daily battle and things are getting very desperate. I didn’t care what variety we got on the rapeseed as long as it had a neonic seed dressing,” he says.

He drilled 16.5ha of neonic-treated oilseed rape at the beginning of September, along with his untreated forage rape grown for seed.

“Last year, I heard of significant areas of oilseed rape being abandoned around here and it’s the same story again now,” he says.

So far all oilseed rape and forage rape grown on the 1,500ha farm has been subject to identical insecticide regimes, including the neonic-treated crop.

“We are entering the larvae stage now and I dare not take any risks or leave anything to chance, even with the neonic-treatment crop. These are very challenging times to be growing oilseed rape. I think if you didn’t get the crop drilled by 20 August then you’re in trouble now,” he explains.

Mr Law believes the coming days will be critical in deciding if the worst-hit crops pull through and if they do fail then it will be too late to drill areas again.

As an experiment to see the benefits of early drilling, Mr Law drilled some forage rape on 12 August.

“We wanted to see the difference that made to control. The main problem we are having with that field now is regulating the growth, so we may have to bring some sheep in to graze it back otherwise it will be at risk of lodging later on,” he says.

The oilseed rape area is estimated to be down 10% this autumn due to low rapeseed prices, the restrictions on the use of neonic seed dressings and a late wheat harvest.

This will be the fourth successive season the oilseed rape area has fallen from an all-time high of 756,000ha for the 2012 harvest.