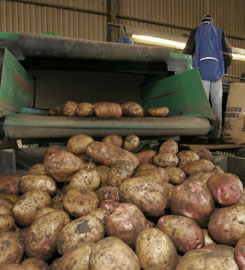 Cambridgeshire fresh produce company MBMG has gone into administration, resulting in job losses and uncertainty over whether growers will be paid for outstanding invoices.

Ian Carr and Malcolm Shierson of Grant Thornton were appointed joint administrators on 10 July 2009. Attempts to secure a buyer for MBMG’s Holbeach and Bicker sites in Lincolnshire failed, so both will be closed down. Grant Thornton said the businesses would continue to trade for a few weeks, to give customers more time to find new suppliers.

“As administrator I am bound to put the needs of creditors first,” Mr Carr explained. “Against this backdrop and in the context of the current market conditions it has proved impossible to continue trading and so we have had to take the difficult decision to close the business.

“We are doing all we can to aid customers as they transition to new suppliers and to support employees.”

The 43 employees at Holbeach and 41 at Bicker have been informed of the decision.

Farmers and growers who supplied MBMG are classed as creditors. It will not be until the value of all of MBM’s assets has been realised that the administrators can decide how much each creditor can be paid back.

A statement on MBMG’s website said outstanding invoices to the date of administration would be classed as an “unsecured claim” and details of any claim should be sent for the attention of Zohaib Nadeem to Grant Thornton UK LLP, Byron House, Cambridge Business Park, Cowley Road, Cambridge, CB4 0WZ.

Purchasers of the property and/ or assets of the business are actively being sought and any interest should be directed to Paul Addison at Grant Thornton – paul.j.addison@gtuk.com.

In February Lincolnshire food company QV Foods confirmed that it had acquired the retail and foodservice division of MBM Produce and immediately took over operation of its March potato site.

It is understood that MBMG employs more than 500 people across the UK, serving all sectors of the industry including retailers, processors, wholesalers, caterers, large foodservice operators and the export market with a range of fresh vegetables, fruit, salads and over 600,000t of potatoes.

Have you been affected by the changes at MBM/ QV? If so, tell us about it in the FWi forums.