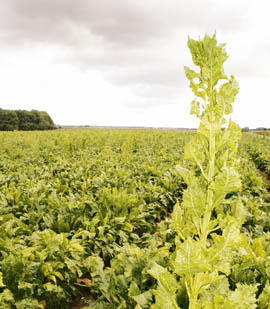 New sugar beet varieties with a much lower risk of bolting even when sown early have been added to the BBRO Recommended List for 2012.

Of the six new varieties added, four have a lower early sowing bolting score than any previously recommended variety.

All four varieties – SES Vanderhave’s Cayman, Badger and Lippizzan, and Columbus from Strube’s breeding programme – will be marketed in the UK by Elsom Seeds. .

Resistance to bolting was likely to be a critical characteristic for growers in the future, manager of the firm’s sugar beet and oilseed portfolio Ian Munnery said at a RL launch briefing. “To get high yields you need to have a growing season long enough, and if factories are going to open earlier [in response to last season’s harvesting problems], then there will be a need to drill earlier,” he explained.

Early sowing could significantly increase yields, with trials suggesting a 10% improvement in yield from an early March sowing compared sowing a month later.

But it also significantly increased the risk of plants bolting, so growers would be increasingly demanding varieties with a lower risk of bolting, Mr Munnery suggested.

The three new SES Vanderhave varieties set a new standard for bolting, with less than 75 bolters/ha on average from early sowing. Cayman, in particular, has had stunning results in trials with just six bolters/ha in early sowing trials and none from a normal sowing date.

But Mr Munnery stressed growers shouldn’t think this meant the variety wouldn’t bolt under any circumstances. “All varieties will bolt when under stress, but there is less risk with these varieties.”

Yield remained the key attribute growers should look for when choosing a variety, said Richard Nicholls, head of commercial agriculture for British Sugar. “It is the key driver for driving down growers costs of production.”

Only one remaining non-rhizomania tolerant variety, Saracen, has more than the 3% difference in sugar yield that indicates a significant difference in yield between varieties. As a result, other attributes such as bolting resistance would become more important when variety choice was made for the 2012 crop, Mr Munnery said.

Disease resistance was the other attribute growers could use to differentiate between varieties, Simon Witheford, KWS sugar beet product manager, said. His firm had bred the first variety to have a double source of resistance to rhizomania to be added to the RL.

Isabella KWS contained two major genes – the existing Holly resistance gene and a new C48 gene bred in from a wild beet source. But, unlike when the first rhizomania resistance was bred into sugar beet varieties, there was no yield penalty for including the second resistance gene, Mr Witheford said.

“It will be particularly welcome for growers where rhizomania resistance is greatest or where the virus is known to be resistant.”

Trials with a second C48 variety had given an average yield increase of 36% over beet containing the Holly resistance gene alone, at a site where the more aggressive AYPR strain of rhizomania was present.

In addition, in glasshouse tests, the double resistance gene combination reduced virus content in those varieties, he said. “That decreases the ability of the virus to spread within the UK.”

The final new variety on the list was Pasteur, also from Strube and marketed by Elsoms. It has the second highest sugar yield on the RL at 102.2% of the controls, just 0.3% behind Rosalinda KWS, but doesn’t have the same level of bolting resistance as the other new Strube or SES Vanderhave varieties.

The top variety for sugar yield on the Recommended List, Rosalinda KWS, had shown in trials to have some tolerance to beet cyst nematode infestations, Mr Witheford said.

“Swedish research first indicated it had, what they term, light beet cyst nematode tolerance, which means it holds its yield under low infestation levels.”

That research has been backed up in the UK – a similar study showed it yielded 19% more than Bullfinch in a trial where there was a low infestation from BCN.

But don’t use Rosalinda where there was a high infestation of BCN, he warned. “In that situation you need to use a specifically bred BCN tolerant variety.”

Current KWS advice is that infestation levels of more than 200 eggs and larvae in 100g of soil should be planted with a specific BCN-tolerant variety, while Rosalinda is suitable in soils with infestations lower than that. But more research was being undertaken to more accurately define threshold levels, he said.