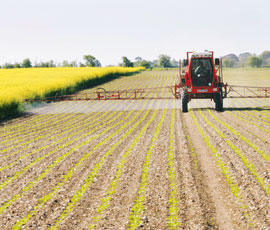 Very slow crop growth caused by the cold, wet conditions has led to delays in herbicide applications and high levels of pest damage.

With the exception of those on light land, very few people have been able to spray, comments Pam Chambers of Broom’s Barn, who adds that crops drilled in mid-March have hardly made any progress.

As a result, bird damage has been extensive, she adds. “The beet plants just haven’t been able to grow away from it.”

The one consolation is that weed growth in the current conditions has been slower as well, she says. “And knotgrass, which can cause considerable problems, has been conspicuous by its absence.”

Where pre-emergence products were applied they have been working well, but are now running out of steam, she notes. “The trend in recent years has been to move away from pre-emergence treatments. But this is a year when they will have paid for themselves.

“The problem for farmers now is that everything needs spraying. Herbicide programmes will need to be robust, with higher rates used and more contact products included. And bigger weeds may need spraying twice.”

She sounds a note of caution about restrictions on maximum herbicide dose. “Don’t break any rules where you need to use more. Switch to a phenmedipham/desmedipham mix rather than straight phenmedipham, for example.”

Stuart Hill of Makhteshim Agan UK agrees that higher rates will be required. “More sprays at higher doses will be needed. The weeds are bigger than they would have been if the crop had grown well.”

Luckily, supplies of Goltix (metamitron) are coming in this week, he reveals. “They will be in time for post-emergence timing, due to the unusual season, so increase the rate and add in some contact activity.”

He suggests including products containing ethofumesate or adding in Rifle (phenmedipham+ desmedipham) with oil. “Using a co-formulation will help to avoid restriction breaches.”

Reuben Morris of Frontier Agriculture sees a requirement for higher doses with oil. “Some crops have got quite a weed burden. Pansies and speedwells, as well as brassica weeds, seem to be the most prevalent.”

His advice is to increase rates of contact materials. “They’ll be needed on larger, established weeds. There’s plenty of soil moisture to get the residual component of spray programmes to work well.

“Although doubling rates will have a cost, the immediate priority is to get rid of the current weed burden, so that growers can start afresh.”

“It’s very extensive. Bangers and flags haven’t been enough of a deterrent and now pigeons are starting on the bigger beet plants.”

She advises the use of low doses of chloridazon as a pre-emergence herbicide. “It’s worked very well and has kept us on track. But weeds are starting to move again now.”