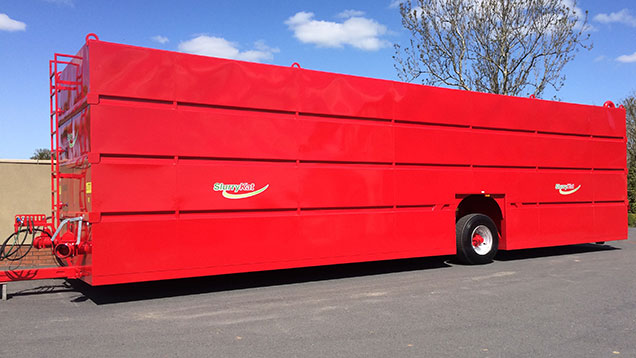 A new range of mobile holding tanks designed to help spread digestate from biogas and anaerobic digestion plants has been launched by Northern Ireland maker SlurryKat.

The mobile nurse tank acts as the master tank when spreading digestate with an umbilical slurry system.

It is aimed mainly at biogas plant operators and contractors who are finding it an increasing problem connecting haulage tankers to the umbilical system in the field.

The regular spillages involved can cause an overdose on the field and kill areas of crop.

SlurryKat says that the increasing size of farms and numbers of biogas plants being built means there is a growing need for specialist slurry handling equipment.

“In February we supplied a 3,000m SlurryKat umbilical system complete with 15m dribble bar to a biogas plant,” says the company’s Garth Cairns.

“While the clients were very happy with the performance of the umbilical system, they faced the challenge of their land being up to 40km away from the biogas plants.

“They were using tri-axle articulated road trucks to haul the digestate to the roadside of these fields and manually hooking a transfer hose between the truck and the umbilical system pump.

“The contractors found it a messy operation every time the hose was removed from the truck. It was also a problem stopping the dribble bar in the field between each load.

“This stoppage created an overdose at that particular point in the growing crop, which led to the crop being damaged and in some instances killed off.

The answer, he says, was a system that allows the trucks to bring the digestate to the roadside and discharge their load into the tank without affecting the operation of the umbilical system.

Most importantly of all, there are no stoppages during the spreading process.

“The tank acts as a buffer with the level in it rising and falling as the trucks discharge their load into it,” he says.

“This system allows for continuous spreading for hours and is a great advance in slurry handling management.”

The tanks use a full-frame monocoque construction with press-formed side panels for added strength.

The tank runs on a specialised floating bogie axle system that can be raised and lowered from the tractor cab.

They are fitted with a commercial hydraulic lifting braked axle and 385/65R22.5 road tyres.

Level indicators are fitted front and rear with a top access hatch plus external and internal ladders.

All tanks have a venting system with front and rear discharge/fill ports with sump system.

There is also a load protection system that only allows the tank to be lifted up to the wheels unless it is empty. That avoids moving the tank with liquid inside it, which could lead to an accident.