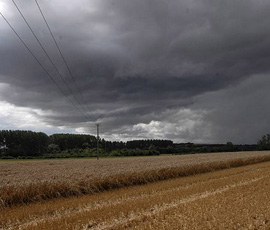 “We’ve had 130mm of rain over the past two weeks, so are getting a bit nervous,” said Colin McGregor at Coldstream Mains Farm, Coldstream.

“But the ground has been able to take it, and we started drilling oilseed rape yesterday.”

So far Mr McGregor had cut all of his Volume and Cassia winter barley, with mixed results. “I think the Cassia probably had the edge, in terms of yield.

“Some spot yields were good, but there were poor areas where there was less water retention over the spring, so overall yields were below average,” he said.

Unusually, Mr McGregor expected to move into early-drilled winter wheat and spring barley this week, with oilseed rape still not all sprayed off.

“It’s all a bit topsy-turvy this year – the rapeseed won’t be ready until the last week in August, so we’re going to be chopping and changing between all the crops.”

The spring barley and early wheat looked quite well, he added. “The barley bushel weight was good, so hopefully the sunshine will have had some benefit – but it’s really all about next year now.”