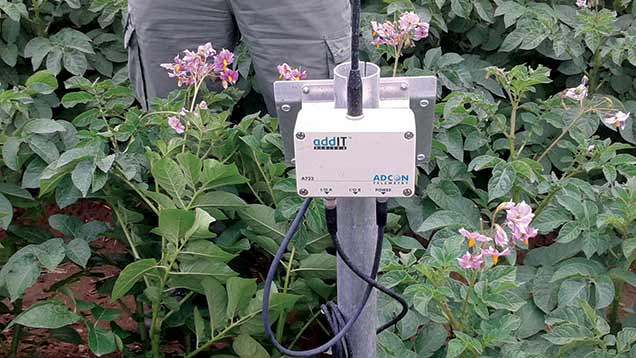 An in-field sensor that measures the amount of nitrogen being supplied to crop roots is set to bring precision farming to a new level.

The system being developed by Tony Miller, senior scientist in the metabolic biology group at the John Innes Centre (JIC), could be commercially available to farmers in the next two to three years. This follows successful trials last year.

Technology is already commercially available that assesses the nitrogen status of crops, in the form of tractor-mounted sensors measuring light reflectance from plants.

In addition, there is the leaf chlorophyll meter, or growers can measure the nitrogen content of sap taken from plant leaves.

But as Dr Miller points out, while both these methods give an indication of the nitrogen content of the crop, the downside is that by the time you detect a nitrogen fall, it is too late. “The yield penalty has already been inflicted,” he says.

Therefore, researchers at the JIC started looking at the potential use of sensors in the soil, as they could detect a shortage in soil supply before the plant is affected.

However, one hurdle was that the research sensors were delicate, housed in tiny glass tubes.

So the research team set out constructing a more robust version enclosed within a Teflon body. Dr Miller explains that the sensor is buried in the ground while connected to a data logger above ground to store information.

The following year, the sensors were trialled in the Rothamsted Broadbalk long-term wheat experiment, with sensors buried in the zero-nitrogen plot plus others in a neighbouring plot receiving manure.

It proved successful, measuring differences in nitrogen supply over a season.

“While the sensor was successful, one downside was that it was too expensive for wider use, with a single sensor costing about £200-£250, constructed using commercially available materials,” says Dr Miller.

His team managed to build a cheaper prototype using materials in the lab including plastic pipette tips and ear-plugs, costing just a few pounds. Further testing showed it still worked – though the life of the sensors was notably shorter.

Last year, the sensors were incorporated within an Agrii/Adcon moisture meter monitoring system in a crop of potatoes to help with irrigation scheduling. The sensors highlighted when nitrogen levels fell, in principle enabling the supply to be topped up by adding fertiliser to the irrigation water.

Now Dr Miller is looking to commercialise the sensor system, comprising a steel rod that is inserted into the soil and has nitrogen-sensing buttons at three different depths.

The buttons can be changed to measure ammonium instead of nitrate and he also believes it could monitor P and K, thus eventually measuring the supply of all three key nutrients to the roots.

“We don’t yet know how many sensors would be needed in a field. However, when averaging the output from four to six sensors in a few square metres, we easily find detectable differences between high and low nitrogen applications on adjacent plots.”

He believes the measurements can be linked to field mapping and he has a funding application submitted to investigate this idea.

“The sensors can be used to assess soil health and fertility before adding fertiliser. If growers know exactly how much nitrogen there is in the soil, they can target where and when they need to apply fertiliser. This has the potential to save them money, time and reduce the effect on the environment,” he says.