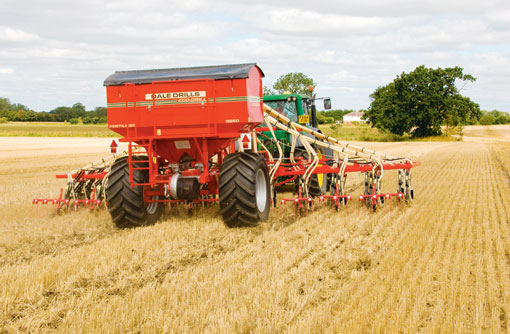 “If you have good soil structure and organic matter on your land I believe you will have excellent crops,” he says.

To begin with he used a green waste compost supplied by the local council at £5/t, spread at 20t/ha. “While it didn’t make a big difference on our lighter land, it made a big difference to the heavier land, where it improved the condition of the soil and increased yields.

“We also saved up to 70% on our P&K fertiliser use, which we’re still saving on now, even though we stopped using compost in 2009.”

That decision was made because applications were delaying cultivations and drilling, which a couple of wet autumns exacerbated.

Instead the farm switched to a strip-till establishment system using a Claydon Hybrid drill. “Since using this system we are improving soil structure and organic matter even more without having to use the compost,” he says. “The quality of the soil and the worm count are fantastic.”

Drilling can start two weeks earlier and yields are improving year-on -year. “The moisture we conserve is a big plus, and we’re using less chemical because we’re not moving the soil. We’re also saving on costs, saving over 70% against our min-till system in fuel, finance, wearing parts and labour.”

• Read more from our in depth soil organic matter guide