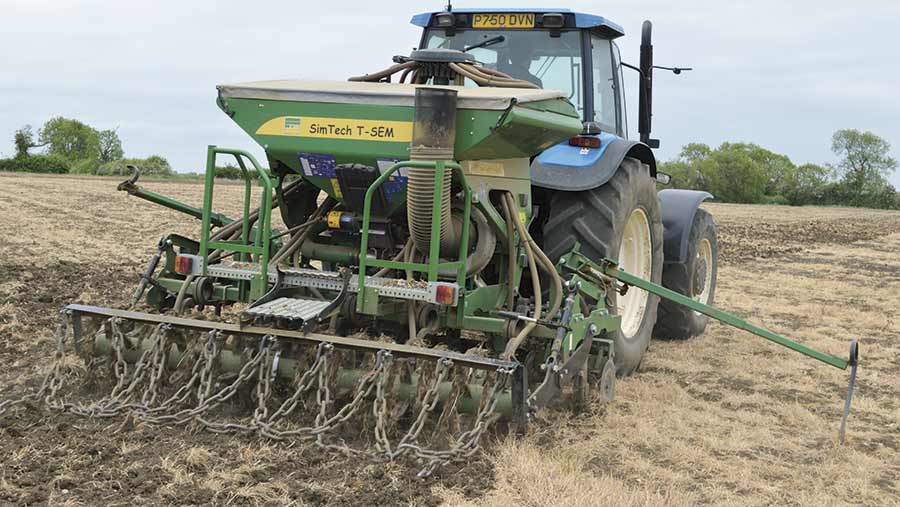 Tristan Baxter-Smith is part of an expanding group of arable farmers growing soya which has seen the crop’s area nearly double this spring.

Looking for a profitable break crop on his heavy Northamptonshire soils to replace the poor profitability of spring beans, he has tried a small area of soya for the first time.

Attracted by the current strong soya price and the crop’s low inputs he has just drilling his crop into a good moist seed-bed in mid-May.

“Why soya? It’s mainly because of the profit margin. It’s a product that’s a good demand and the price is good,” he told Farmer Weekly.

Farming a relatively small arable area of 88ha, he is keen to grow crops that see a strong demand – hence milling winter wheats and spring oats, and now soya.

He is growing 6ha of the variety Siverka and is hoping to harvest the crop in mid-September, at about the same time as spring beans.

“If this crop does well, we will look to increase the area of soya gradually,” he added. 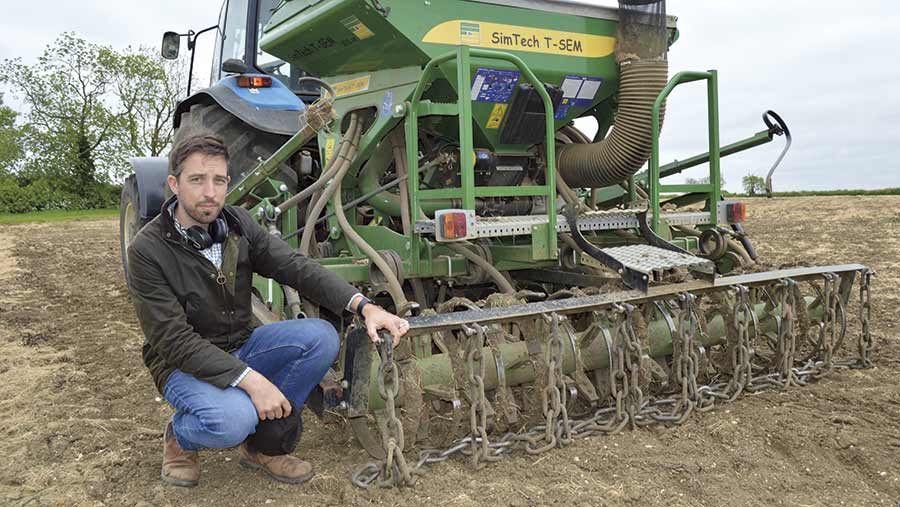 This crop followed spring beans on Poplars Farm, Hannington, five miles north-east of Northampton, and the field was sub-soiled, drilled with a cover crop of vetch and black oats then sprayed with glyphosate and rolled before being direct drilled.

His drilling rate was pushed up to 148kg/ha from a recommended 140kg/ha to account for his heavy soils, and drilled no deeper than 25-37mm and then rolled again.

Seed cost is the biggest expense of the crop so getting good establishment is key with gas-guns and artificial kites used to keep pigeons off the young cotyledon leaves until the first true leaves appear.

“As a small arable farm, we have to do something a bit different so the focus is on crops that people want,” he said.

He is aiming to use a similar pre-emergence herbicide to that used on spring beans, and possibly an insecticide, but is using no fertiliser as the crop follow spring beans and as a legume soya fixes its own nitrogen from the atmosphere.

Blackgrass has been a problem but with rotational ploughing, spring cropping and direct drilling the grassweed is under control, while the late spring drilling of soya will give him more time for control.

David McNaughton, director of Soya UK which supplies the seed and buys back the harvested crop, expects the soya area to rise to 3,200ha from 1,920ha last year following a good harvest in 2017.

He has 180 growers all contracted to produce soya at a price of about £375/t, which is a £25/t premium over imported GM soya from North and South America.

“Next year we would expect the area to double again, and then climb steady largely due to the good gross margin,” he said

He advises that soya can be grown south of a line from Humberside to Pembrokeshire with growers as far afield as Doncaster in Yorkshire, Shropshire, Kent and south-west Wales.

“If growers are looking for a spring-sown break crop which fixes its own nitrogen, is profitable and with a big potential demand then soy could be interesting,” he added.

Britain imports the equivalent of 3m tonnes of soya annually – 1m tonnes of beans and 2m tonnes of meal – largely for livestock feed.