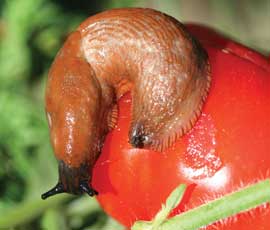 The Spanish slug armada could be back in greater numbers next spring as scientists fear that eggs from their first foray may survive our colder winters.

The giant voracious predators were first reported in Britain in April 2012, but a sharp late spring frost this year killed millions, only for the worry to emerge that their eggs could still hatch.

He saw the slugs feed on potato foliage rather than just tubers, devour a mouse killed by his cat, clean up dog excrement and put off natural predators, such as hedgehogs and birds.

Dr Bedford counted 350 in his garden within half an hour on one wet July morning and even saw them eating injured slugs.

“A wet autumn will enable them to lay eggs and by November most of the adults will have disappeared, but the danger period will come next spring,” he says.

Dr Bedford adds the slugs, which probably entered Britain on trucks coming from continental Europe, can grow up to 15cm long and lay 400 eggs a year, although they are highly susceptible to frost.

He warns the slug – Arion vulgaris – can eat up to 20 pellets of ferric phosphate slug pesticide before dying, but has no data on the effectiveness of metaldehyde.

His fear is the slugs could breed with native species to form a hybrid combining the worst of the Spaniards’ eating habits with tolerance to frost from British species.

He urges growers to look out and report large population of slugs and he is creating a website – Slugwatch.co.uk – so people can record and photograph the slugs to see how they have spread.

He fears there could be a massive escalation as in Scandinavia where they bred so quickly that squashed slugs on roads attracted by road kill became a serious slimy traffic hazard.