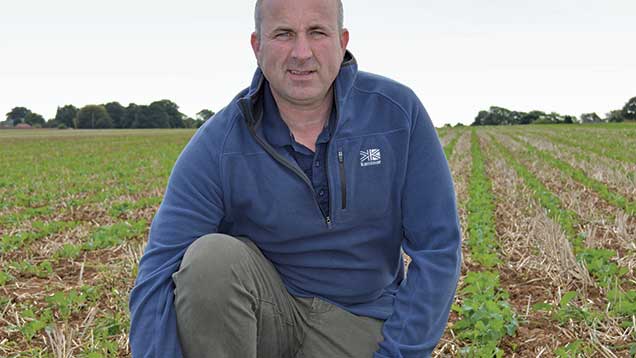 With the oilseed rape area falling for the fourth successive year, David Jones looks at an on-farm trial examining ways of increasing the profitability of the crop.

Lincolnshire grower David Richardson is looking to get some pointers to boost the performance of his oilseed rape crop by trialling a high-input system alongside his own farm regime.

Despite some fields topping 5t/ha on his farm, the fall in rapeseed prices has prompted him to examine ways to squeeze as much profit as he can from his crop.

He is looking to compare a high-input system using a hybrid variety and a robust fungicide strategy with growing a conventional variety using his own typical farm practice.

“It will be interesting to see the difference between the two approaches. If I can lean something it will be worthwhile,” he tells Farmers Weekly.

Mr Richardson is using his own farm practice for seed rates, fertiliser and herbicides across both trials, with Bayer CropScience devising a fungicide/insecticide strategy for the high-input crop.

He has already cut costs by moving to a virtual no-till establishment method and reverted to putting some of his area down to conventional varieties rather than hybrids to save on seed costs.

A field of 29ha with a light limestone-based soil was chosen for the split trial and the hybrid variety Harper from Bayer was drilled alongside a conventional one, KWS’s Barbados.

“In the past we have used all hybrids on the farm, but this season we are trying some conventionals to try and cut seed costs,” he says.

Bayer is looking at the high-input trial to highlight the danger of light leaf spot which is the number one yield-robbing disease of oilseed rape costing the industry £140m a year.

The group conducted a survey of growers which showed that they only put light leaf spot as the number three threat to the crop behind phoma and sclerotinia.

This prompted Matthew Garnett, one of the company’s commercial technical managers, to get involved in the split trial to highlight the importance of light leaf spot control.

“Light leaf spot is such a problem that it can easily take 1t/ha off yields. Once in the crop, the disease is difficult to control,” he says.

Mr Garnett is planning to use a five-fungicide strategy – two in the autumn, one at early stem extension in the spring and two flowering sprays – which is likely to cost about £90/ha.

In addition, he will use two insecticide sprays – one to control aphids carrying turnip yellows virus in the autumn and another for pollen beetle in the spring – in the high-input approach. Both will be Biscaya (thiacloprid).

Farmers Weekly visited the site in late September with the crop well established and largely over the danger period from cabbage stem flea beetle damage.

As soon as the previous winter barley crop was harvested, pig slurry was spread and then incorporated into the ground by discing. The crop was sown on 22 August in 50cm rows using a drill with a subsoiler leg ahead of each drill row.

“Our aim is for low soil disturbance, and although the emergence was good it was slower than last year due to cold weather,” says Mr Richardson.

It is the first time Mr Richardson has grown both varieties, and across the farm’s 135ha of oilseed rape he is growing one-third conventional and two-thirds hybrids.

The aim is for a yield of 5t/ha which certainly looks possible with an average yield of 4.5t/ha at harvest 2015, and with some crops above 5t/ha.

A pyrethroid insecticide for cabbage stem flea beetle control, slug pellets, and phosphate and potash fertiliser were all applied across both trials in the autumn.

“It is very difficult to cut back much before Christmas and we need a Kerb application to keep on top of our blackgrass,” he says.

The agrochemical and seeds group is planning two application of prothioconazole, 0.32 litres/ha in October primarily for phoma and 0.46 litres/ha for light leaf spot in November.

The advised threshold for phoma treatment is when 10-20% of plant are infected, while the danger of phoma is high when 20 rain days occur after 1 August, and this threshold has already been hit at Adas’s Boxworth site in Cambridge this season.

It is also planning to treat the crop with insecticide Biscaya to control Myzus persicae, the aphid carriers of turnip yellows virus which is a disease prevalent in Lincolnshire.

Plans for the spring

The high-inputs crop is expected to receive three fungicide and an insecticide in the spring.

“We are expecting to see that robust disease control will lead to a healthier and better protected crop,” says Mr Garnett.