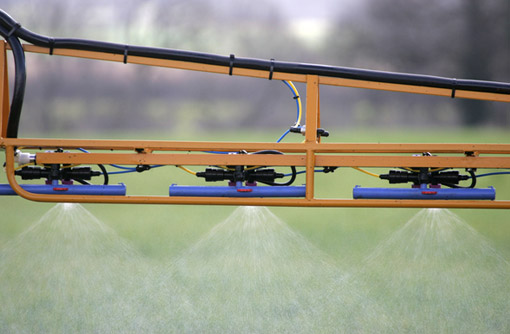 In our second look at data submitted by GateKeeper users as part of our Spotlight data sharing initiative, we asked independent agronomist Patrick Stephenson to pick some key trends for herbicide use in the harvest year 2011. Adam Clarke reports

According to the FERA/DEFRA pesticide use survey 2010, herbicides represent 32% of all pesticides used in Great Britain out of a total spay area of 68.8m hectares, which is second only to fungicides (50%). This highlights the importance of herbicide use to protect crop yields.

For more on the GateKeeper Spotlight Initiative, and to see variety, yield and fungicide use trends for the 2011 and 2012 harvest years, visit www.fwi.co.uk/crop-data 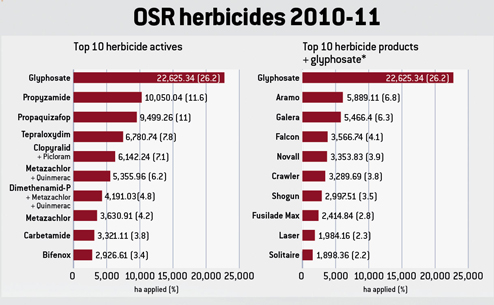 On the sample farms, sprayers covered an area of 86,500ha, with herbicide over the total crop area of around 19,000ha. “Around 78% of the area received a metazachlor mix, which is what we would expect to see in most programmes,” says AICC agronomist Patrick Stephenson.

“A figure of 70% receiving a post-emergence graminicide would indicate the dataset is predominately south of the Humber, with those growers trying to get on top of problematic grassweeds such as blackgrass and brome,” he adds.

“Diquat use in the data set is very low, which reflects what we see in most situations, with glyphosate the overwhelmingly dominant product for crop desiccation.” 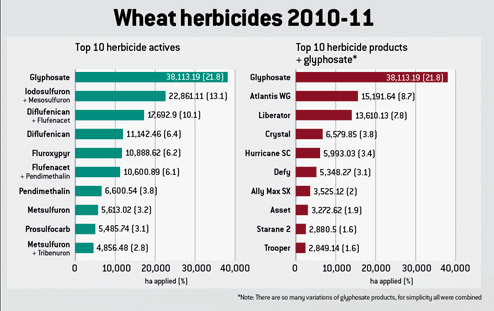 The battle of the pre-emergence herbicides on the 42,000ha of winter wheat has been won by Liberator (diflufenican + flufenacet), notes Mr Stephenson. “The high use of DFF highlights the cost-effectiveness of the active, but the question arises as to what has partnered the Atlantis treatments.

“Auxiliary (clodinafop + prosulfocarb) use is low and pendimethalin, even adding all variations together, still only amounts to 50% of the Atlantis total,” says Mr Stephenson.

Topik (clodinafop) remains the preferred option for wild oat control, which points towards the dominance of wheat in the rotation across the dataset. “Broadleaved weed-specific products are dominated by cleavers, with Ally (metsulfuron + tribenuron) susceptible weeds in second place,” he says.

Mr Stephenson also notes the dominance of Bayer CropScience products containing key actives, but also the rise of generics, which now account for a significant quantity of the total applied. 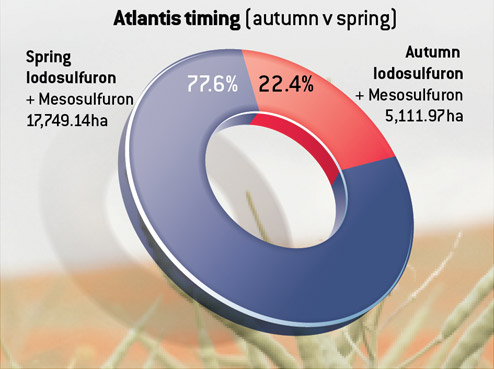 Despite the manufacturer advice encouraging early application on small blackgrass plants, 77.6% was applied in the spring, where application conditions were probably favourable. “The autumn 2010 applications were late according to the figures, which is likely to give indifferent levels of control,” adds Mr Stephenson.