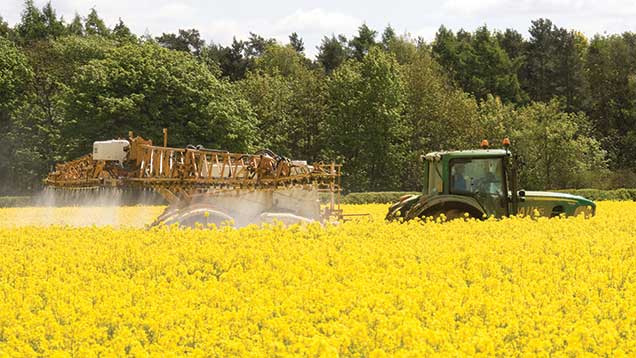 Oilseed rape growers should be aware that spray timing is more important than fungicide choice when it comes to sclerotinia control.

“With sclerotinia, it’s all about protection, and that’s one of the biggest difficulties that growers have,” says Dr Julie Smith, research scientist with Adas.

Fungicides need to be in place before significant petal fall occurs in the oilseed rape crops as the ascospores released when the sclerotia germinate need a nutrient source, which the petals very conveniently provide.

So if the petals attach themselves to the leaves or stem of the plant as they fall and airborne inoculum is around, there is an opportunity for infection to take place.

While it isn’t possible to prevent the release of ascospores, sclerotia germination can be tracked (see below).

“Germination takes place when soils reach a temperature of 8-10C and there’s some soil moisture. The spores then infect plants when temperatures are above 7C and there’s high humidity,” she says.

A further consideration at the field level is that it isn’t possible to get more than 18-19 days of protection from a single spray.

So while it is possible to get good control from a single, well-timed application, there has been a tendency to use two sprays in high-risk situations or where flowering is protracted.

Stuart Hill of distributor group Frontier believes that a two-spray programme – timed for early flowering and mid-flowering – will be important this year, even if seemingly dry conditions prevail.

“There’s about a three-week limit on spray persistency. So getting applications to cover the whole petal fall period is more likely with a two-spray programme. And we’ve learned from past experience that sclerotinia doesn’t go away if it dries up – dew is enough to cause petal stick,” he says.

For practical reasons, the first spray may be combined with a canopy management application.

“That tends to happen slightly earlier at the green/yellow bud stage. So a follow-up at mid-flower should be just ahead of significant petal fall,” he says.

Getting good spray coverage of the petals is essential and he advises using vertical nozzles pointing straight into the canopy to maximise penetration. Guardian air nozzles are appropriate for this application.

He warns against reducing water volumes too far. “Crop canopies will be dense and reasonably sized. As long as the label allows, try not to go below 150 litres/ha and keep your forward speed to 10-12km/hour, to ensure maximum petal coverage and less drift,” he says.

Of the fungicide products available, Mr Hill says the SDHI/azole and SDHI/strobilurin combinations are among the most effective choices, and represent a step on from single active ingredients.

He picks out Skyway (bixafen + prothioconazole + tebuconazole) and new arrival Pictor (boscalid + dimoxystrobin) as having performed well in trials, but acknowledges there are other choices, including another newcomer Symetra (isopyrazam + azoxystrobin).

“With some of these, growers must look at what’s already been applied to the crop. You can only use two SDHIs and two strobilurins in the programme and stewardship of the chemistry is important,” he says.

Whichever product is used, rates should be maintained. “That mid-flowering spray will generally be your last shot. So for Skyway, use 1 litre/ha and for Pictor use 0.5 litre/ha,” he says.

Assessing the disease risk in your area can be done using the improved BASF/Adas sclerotinia monitoring service, which sprung into life at the end of March.

The information is generated from seven sites around the country, including a new one in Scotland for 2015, to generate the local risk. A colour-coded map of the UK is produced, with green indicating low risk and red showing high risk.

Each site is then supported by petal tests at first flower, early flower and mid-flower, to establish disease pressure from airborne spores.

Dr Young advises growers that oilseed rape crops are at the highest risk when sclerotial germination coincides with early flowering.

“Germination had started in the south of the country by the end of March, but crops were not at risk of infection due to their development stage. Even forward crops were only at green bud stage and infection tends to occur via petals,” she says

To see the results and get a postcode-level risk assessment, visit www.totaloilseedcare.co.uk