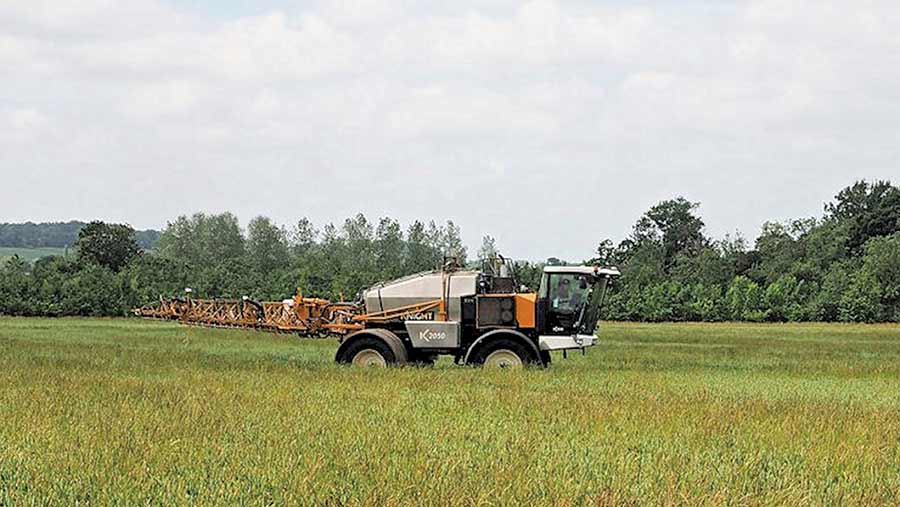 Armed with field maps generated by the eyeWeed system, farmers can target patches with herbicide stacks and sequences as well as tweaking seed rates to boost crop competition.

The advanced eyeWeed prototype that was put through its paces last season comprises six spray boom-mounted cameras (pictured below)linked to a computer that can map blackgrass patches within wheat crops in mid-June during a routine ear fungicide spraying operation.

One key advantage of the sprayer-based system is that the resulting map is much higher resolution than is possible with aerial imagery, says Agrii decision support services manager John Lord. Potentially it detects down to one head/sq m..

It can also produce blackgrass infestation maps in real time without any extra operations and with none of weather-related limitations of using drone or satellite imaging, says Mr Lord, who leads the project.

“We have developed the system during detailed work on a number of fields across several farms over three full seasons to map blackgrass patches with great accuracy in wheat during T3 spraying,” he says.

Unlike other approaches, he highlights that no field walking is required to “ground truth” the weeds identified and all the work can be done as part of normal field operations, whenever the weather is suitable for spraying.

“The maps we are producing can be automatically employed in management zoning as part of precision farming systems for variable seed rates, as well as targeted pre-, peri- or post-emergence patch spraying.”

“In all but the worst cases, blackgrass is concentrated into well-defined field patches. So it makes sense to concentrate higher seed rates and the most robust autumn herbicide stacks and sequences on these wherever possible, rather than using them across the whole area,” he says.

Mr Lord says this patch-spraying approach can increase gross margins by £50/ha or more, as well as delivering valuable environmental benefits at a time when both are becoming more important to most growers.

“The maps can also be used for automatic summer patch-spraying with glyphosate, if necessary, and for greater precision in autumn cultivations and stale seed-bed management where feasible,” he adds.

“At the same time, they provide the best possible field-by-field records for planning future blackgrass management and tracking the success of control strategies, not to mention the development of resistance.”

While blackgrass management has been its initial driver, he adds that the system offers huge potential for use in a range of other mapping and crop management applications linked to sprayer work.

The team is also exploring using the camera system in the summer to map blackgrass in barley, and developing software that can identify other weeds, such as ryegrass, wild oats and brome in wheat.

“We have also designed the unit to take another sensor at each camera housing, so it could be employed to provide NVDI maps [an indicator of plant biomass] for variable nitrogen applications or any of a number of other sensing technologies under development too,” Mr Lord says.

Looking to its commercial use, he sees eyeWeed being employed as a regular tool with no extra effort required and for little extra cost throughout the spraying season to provide invaluable, near-to-real-time crop information for the most effective precision agronomy.

The system is expected to be available for commercial use within two years.

The project, co-funded by Innovate, is run by a consortium of commercial and academic partners led by Agrii, including the University of Reading, Concurrent Solutions, Knight Farm Machinery, Syngenta, and Patchwork Technology.