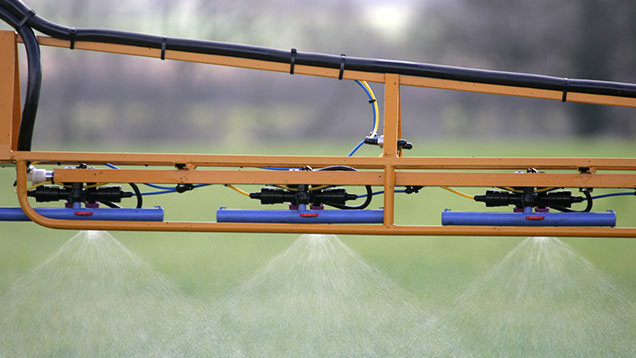 A week’s delay at the flag leaf timing caused yield potential to fall by 0.5-1.0t/ha, with further losses incurred as the delay increased, according to Agrovista trials.

“Nothing can fully make up for poor timing,” says the company’s Mark Hemmant.

“But attention to a few key application areas, such as boom height, adjuvant use and water volume, can make a difference to disease control.”

See also: How to get your T2 timing right to maximise wheat yields

Flat fan nozzles are more effective in normal spraying conditions, although air induction nozzles are less prone to drift, he adds. “Where they have to be used, adding Velocity, an oil-based adjuvant, can lift their efficacy.”

“The optimum boom height is 0.5m above the crop. Doubling it increases drift by a factor of 10 with flat fan nozzles.”

Finally, Mr Hemmant reveals that water volumes of 100 litres/ha have given better disease control than 200 litres/ha where yellow rust was the target.

“It increased work rates by a third too, allowing more of the crop to be treated at the optimum timing.”