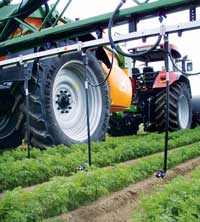 Syngenta’s Sprays and Sprayers Arena will feature a vast range of demonstrations of the latest self-propelled, mounted and trailed sprayers at Cereals 2010.

In the arena, Amazone is set to launch its largest trailed sprayer yet, offering 6600 litre capacity.

The UX6200 Super is part of the new UX Super range which features extra tank capacity and are aimed at contractors and large scale farmers.

Amazone will also be profiling its updated UX trailed sprayers. The company says that tank capacities have been increased by roughly 5% for the new top of the range UX6200.

The main difference on the UX Super is the improved valving system that increases filling speeds to around 800 litres/min.

This allows for faster turn round times and reduces the sprayer residual volumes. A new UX4200 Super 28m will be on show in the arena.

The much anticipated Challenger RoGator 600 self-propelled sprayer range makes its UK debut at Cereals. The completely new machines have unique features in every area and set the new standard for the sector.

The Micron Varidome is a shrouded, low-volume, inter-row CDA sprayer for removing weeds growing in between row crops. For example, volunteer potatoes in carrots, onions, leeks, parsnips, or other crops such as maize where row spacing is between 80mm and 800mm.

The Enviromist low volume CDA sprayers have been used for inter-row weed control in UK top and soft fruit.

Syngenta will also be presenting the Farm Sprayer Operator of the Year Award.

Self-propelled Sprayers 3100 litres and above

Self-propelled Sprayers 3100 litres and above