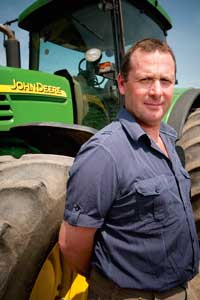 Setting up a system that confines all field machinery to the same permanent traffic lines year after year can do wonders for the soil, but just the opposite for the bank balance.

Ensuring that the width of spray tramlines, combine tables and cultivation equipment all share a common denominator is the key behind controlled traffic farming, but often requires substantial re-equipping.

Jeff Elston (pictured) faced just that problem, so rather than buy all the kit at once, he decided to spread the costs over several years.Four years into his five-year conversion programme, the benefits are starting to show on the 800ha of wheat and oilseed rapehe manages for Whitbread Farms, near Bedford.

Speaking at a recent CTF open day, he said there were two unavoidable processes when growing a crop – planting and harvesting – and he wanted to complete these tasks in the most cost-effective way.

“There was a limit to how much we could simplify our harvest process, but planting was labour-intensive, required several separate processes and could be simplified by direct drilling,” he said.

But for direct drilling to work, improvements were needed to the farm’s soils, whichrange from heavy clay to light sand. Reduced trafficking seemed the obvious route.”In the past, this would have been extremely difficult, but accurate guidance using GPS means we can use the same wheel marks over and over,” said Mr Elston.

The process has been slotted into a five-year capital budget. “When equipment has come up for renewal, it has been replaced by machinery at CTF-friendly widths,” he added.

The process kicked off with a new 5m Vaderstad Top Down cultivator four years ago, replacing a set of discs and press, which was later cut down to 4.5m to fit the controlled traffic system.

The change enabled the farm’s Caterpillar 55 and John Deere 8520T to be replaced by one John Deere 8530 on the H-track system, a move that reduced machinery costs by almost 60%.

The system works on 36m tramlines, with the 9m combine table and the 4.5m cultivator fitting neatly between. All machines operate on standard 2.3m track widths except the combine, which is set at 3m.

Combine, sprayer and tractor are all fitted with the John Deere RTK guidance system, which is accurate enough to ensure the same wheel marks are used every year.

Although track widths are regulated and most operations fit into the system, drilling is yet to come into line.”We are still using our 4.5m Top Down cultivator followed by a 6m Vaderstad Rapid drill and haven’t found a suitable replacement as yet,” said Mr Elston.

Moving to a 9m direct drill would be ideal, he added. “I need a drill that can incorporate trash and generate enough moisture to establish a crop effectively. Direct drills currently on the market just aren’t aggressive enough.”

Another problem to be overcome is unloading grain on the move. Although the spout was long enough to allow the trailer to run in the combine’s previous wheel marks, the standard 1.85m axle trailers sat within these, he noted.”I am debating whether I go for wider-axle trailers or opt for chaser bins, but self-propelled chaser bins are my ultimate aim.”

Although the conversion process is not complete and there is still a significant level of trafficking, soil condition is noticeably better, said Mr Elson.”We are starting to see improvements in soil workability and have already been able to reduce levels of deep cultivation.” 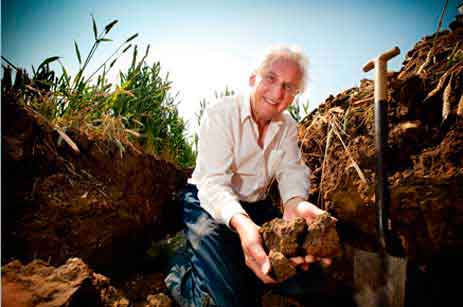 “This can extend up to 8in below the surface in wet conditions and can be corrected only by running a subsoiler through just below the level of compaction.

“CTF prevents compaction from occurring and creates a natural, open soil structure, which allows roots to move vertically through.”