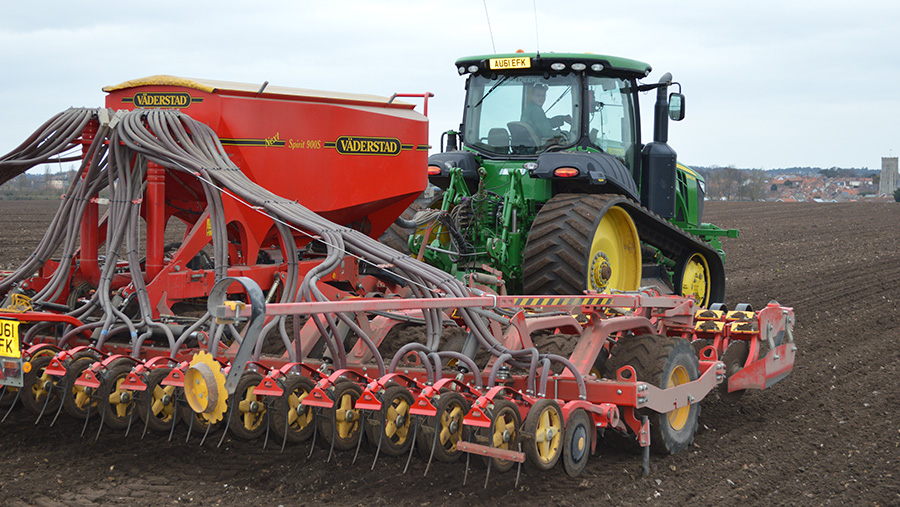 Spring barley drilling is racing ahead on one north Norfolk estate with a quarter of the malting crop sown by the end of the weekend after earlier delays due to wet weather.

Drilling started last Tuesday and 120ha was sown by the end of play on Sunday (20 March) at the Holkham Estate, north of Fakenham, with an area of 500ha earmarked for the spring crop.

Farm manager James Beamish says drilling is racing ahead under blue skies on Monday (21 March) and he is hoping 160-170ha will be in the ground by the end the day.

Some 70mm of rain has fallen so far in March following a wet winter on the estate close to the sea which usually produces a good malting sample of barley from its sandy loam soils.

“Normally we start drilling in the first week of March, but with a good week now it will be all in the ground”
James Beamish, farm manager

“Normally we start drilling in the first week of March, but with a good week now it will be all in the ground,” Mr Beamish tells Farmers Weekly.

The estates with 2,300ha of managed arable land grows all Concerto spring barley across its 500ha, and targets a nitrogen content of 1.6% for the malting market.

Last season, spring barley yielded about 8.5t/ha and of the 4,500t produced some 1,300t went on contract to Suffolk brewer Adnams.

The family-owned beermaker based in Southwold buys about half of its annual need from the estate.