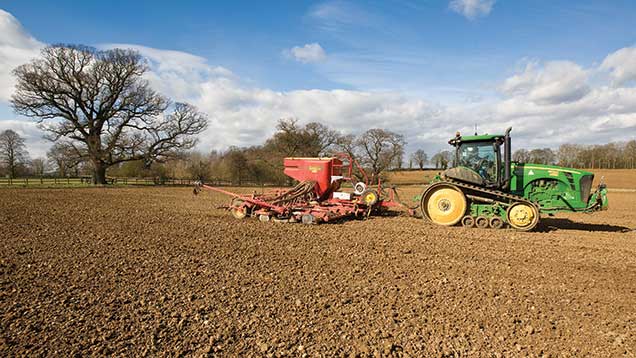 The variety Propino is set to be the big winner as the spring barley drilling area is expected to rise nearly 10% at the expense of older varieties such as Tipple.

Some seed traders expect the variety to make up more than half of English spring sowings of commercial seed as growers opt for one of the maltster’s favourites.

“The UK maltsters will take this spring barley variety with the right specification giving growers the chance of a premium here or abroad,” he tells Farmers Weekly.

The HGCA early-bird survey expects UK spring barley planting to be up 9% at 713,000ha as growers move to spring drilling to counter blackgrass and to also comply with the European Union’s three-crop rule.

The surge in spring barley comes as the area of oilseed rape and sugar beet have both fallen, and most growers are opting for malting spring barley varieties as their yield matches the best of the feed varieties.

This rise could put the crop at one of the highest areas on record, although still below 2013’s 903,000ha, which followed a dip in autumn drillings due to wet weather.

Mr Barker expects malting varieties Propino, Odyssey and Concerto to be the top three varieties in England this spring, with the first taking 40-50% of the area and the latter two below 10% each.

Commercial seed sales make up about half the spring barley seed market, with home-saved seed accounting for the rest.

Odyssey and Concerto are the only two varieties on the current HGCA Recommend List fully approved for both brewing and distilling, while Propino is only approved for brewing.

David Waite, northern seeds manager at distributor Frontier, expect Propino to dominated in England with a 50%-plus market share, and Concerto to be top in Scotland with more than a 60% share.

“Propino is a good, reliable variety with a ready end market, so it ticks all the boxes,” he says.

Newer malting spring barley varieties, such as Sanette and Irina, only have provisional rather than full approval from the Institute of Brewing and Distilling so growers are being more cautious.

Older malting favourite Tipple is losing ground as it yields some 5% below Propino and 10% behind Sanette on the HGCA Recommended List.

Specialist feed varieties such as Westminster in the West and Waggon in the North will hold their appeal in areas where growers look for feed value and straw length rather than malting quality.

Traders estimate that only about 10-15% of the spring barley crop has been drilling, largely on the lighter land, but this is expected to pick up in the next few weeks.

More than one-third of the UK spring barley crop is grown in Scotland, but this season the crop area is set to be down 10% to about 250,000ha.

This comes as many specialist malting spring barley growers have had to comply with the three-crop rule, which is linked to farm subsidy levels.

“The market in Scotland is very reliant on just one variety, Concerto, which could show a market share in excess of 60%, or even more than 70%,” he says.

The Scottish crop is dominated by varieties such as Concerto, Odyssey and Belgravia, which can be used in the all-important distilling industry.

Belgravia is set to be the second most popular variety in Scotland with about a 10% market share and Odyssey, third, at about 5-6%.

Odyssey is slightly late to mature so appeals more to growers in southern and central Scotland and could be too late for those further north than Tayside, traders say.

With the popularity of Propino in England, the price of commercial seed has risen to £380-390/t from £350/t earlier in the season and could go even higher.

Traders say if UK-produced seed sells out and more seed needs to be purchased from continental Europe or Ireland, then the price could push above £400/t.