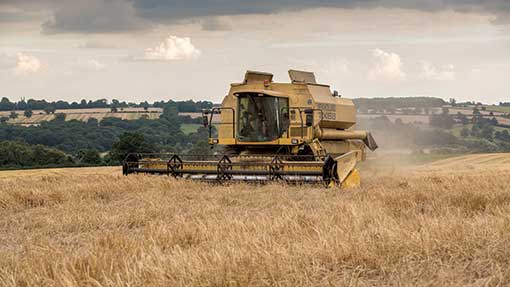 With the price of grain plunging sharply to near the cost of production, Luke Casswell visits one grower in southwestern England who is making healthy margins from his malting spring barley.

He is able to keep barley margins healthy by using low inputs on the spring crop and being realistic about his yield potential on his light soils.

The area down to spring barley has gradually increased at Cirencester Park Farms, and next spring he will drill 224ha after achieving a bumper yield of more than 8t/ha this summer

“This year’s yields have come close to what we would get in a first wheat crop, but our normal spring barley yields are about 6t/ha,” he says.

Based close to the Royal Agricultural University in Cirencester, and on challenging Cotswold brash soils over limestone, Mr Batchelor favours spring barley over a second successive winter wheat crop.

Keeping spring barley a low risk and low input crop is crucial, and weed control prior to planting holds the key to avoiding heavy spending later.

Blackgrass is one of the main threats and multiple glyphosate applications prior to spring drilling offers good control, at a relatively low cost compared to later herbicide treatments.

“If we have got bad blackgrass situations we will tend to drill later. We then don’t normally use a pre-emergence spray and often just go for a broadleaved weed herbicide in the crop,” he says.

“This year we have achieved some brilliant flushes of blackgrass, and although it is not as bad as in the East, spring crops offer a vital tool to stay on top of the problem,” adds Mr Batchelor.

He looks to make a maximum of four pesticide sprays – two herbicides and two fungicides – at a cost of about £100/ha in the crop, but this can be less depending on weed and disease pressures.

Knowing the cost of production allows him to tailor the management of the crop to meet the season and still ensure a healthy return.

“If I don’t know how much it is costing me to grow then I wouldn’t know the extent at which I could push the crop,” he says.

It also helps his marketing strategy to ensure he is not selling the grain at a price below what it has cost him to produce.

His light soils are typically much lower yielding than more fertile ones elsewhere, and he explains being realistic about what he can achieve helps keep spring barley worthwhile, with an average yield of about 6t/ha.

“In both our winter and spring crops, we know that moisture will be the principal limiting factor for yield, so inputs are tailored to the season,’ he says.

Growing a successful spring barley crop revolves around good establishment and with drilling taking place from early February rolling into mid April, the impetus is on waiting for the right conditions.

“The key is not to rush it into an unfit seed-bed. There is a wide drilling window and you can achieve good establishment using a number of methods,” he says.

Working closely with Agrii regional technical advisor and agronomist John Vickery, he uses a high seed rate of 425 seeds/sq m and an early nitrogen application to kick start the crop.

Mr Vickery explains that seed rate becomes more important the later into the drilling campaign. Later-drilled crops are less likely to tiller, so choosing a higher seed rate will help compensate and so battle weeds.

He also points out that later drilling is not likely to be penalised at harvest time, with most crops ready in August, allowing an early entry into oilseed rape.

“Every day in August is precious for oilseed rape, particularly in this area so you need to have it established by the end of the month,” Mr Vickery adds.

He explains that rolling is the final part of the establishment to help retain as much moisture as possible.

The spring barley crop requires a small investment in trace elements such as manganese, copper or magnesium of about £10/ha, according to Mr Vickery.

“Something like manganese is important on the Cotswolds because we have quite high pH soils which can lock up the nitrogen,” he says.

The crop also benefits from a low rate of an ethephon-based plant growth regulator product at the flag-leaf stage to hold the ears on to the plants so reducing combine header losses.

He calculates that growing an average yielding spring barley crop of 6t/ha and receiving £140/t for the malting grain, there is a potential gross margin of £485/ha.

“Second wheats don’t yield exceptionally well around here, so it makes sense to choose a spring crop in many cases,” he says.

The previous season’s cropping is noted, soil testing undertaken and potential yield calculated to assess nitrogen needs of the crop.

He normally opts for a nitrogen rate of 130-150kg/ha in order to make the strict grain nitrogen content of between 1.6-1.8% the maltster needs.

“It is a risk to put too much nitrogen on because you are increasing your inputs and also the risk of losing your premium,” he adds.

This season, the malting Null-Lox variety Cheerio, which has been developed by brewers Carlsberg and Heineken, will be grown along with popular malting variety Propino.

Spring barley helps ease the cashflow demands as money is not spent on the crop until it is planted in the spring compared with autumn-sown cereals and oilseed rape which need hefty inputs in the last few months of the year.

“Spring barley doesn’t really require money to be spent on it until it is planted,” Mr Vickery says.