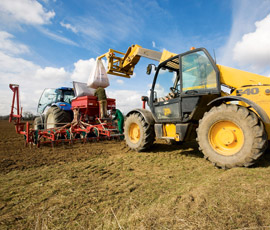 ADAS consultant Susan Twining is predicting an overall 20,000ha increase in the winter cropping, based on early cropping reports. “It is not a major change when compared with the total cropping area of 4.5m hectares, but the spring area will be down.”

Areas of both winter wheat and oilseed rape have increased marginally and we have also seen an increase in winter linseed this year, as more growers see it as a viable alternative to winter oilseed rape.

However, winter barley and oats are expected to remain largely unchanged while “winter beans have taken a bit of a hit”.

“Two years of poor pulse yields have taken their toll,” she says.

Stuart Cree of Ebbage Seeds is predicting a shortage of peas. “There will be shortage, there’s just not enough peas going to be planted come the spring.”

But this shortage offers growers an opportunity and Paddy Barrett of Askew and Barrett believes blue peas could be an especially worthwhile option. Demand is expected to be as strong as ever while production slumped by 40% in 2011 with a further 50% slide anticipated for 2012.

Prospects are also good for malting barley with a growing world beer market while the world barley area is declining, says Stuart Shand of Gleadell Agriculture. The UK is now seen as one of the most reliable sources of malting barley.

“Our crop, with the help of superior storage and drying facilities, as well as highly regarded assurance schemes, mean that we have an advantage. Currently it’s worth a premium of €30/t (£26).”

Margins for linseed, however, are not as strong as they were last season where prices reached £400/t (see table). An influx of linseed from Kazakhstan is one reason for the tighter linseed contracts, says Andrew Probert of Premium Crops.

“It’s a legacy of the GM contamination issue,” he says. “A couple of years ago, when exports into the EU were stopped, the crushers had to scratch around for supplies of linseed.”

Whether these imports will continue into 2012 remains to be seen, he adds. “There are some end users who only want west European supplies and they are prepared to pay for them.”

Finally, for growers drilling cereals after sugar beet, spring wheat could be a good bet with newer varieties challenging the concept that it’s better to sow a winter variety.

Their high yields – often just as good as those of established winter varieties – together with respectable agronomic characteristics, mean that the gap between winter and spring types is closing fast. Spring wheat now accounts for about 5% of the total UK wheat area.

Forage maize for biogas is another crop that is gaining ground, but Mrs Twining adds that it is still a relatively small area. But in some local areas near a anaerobic digester, it is becoming a significant crop. “It will be interesting to see how it develops in coming years.” 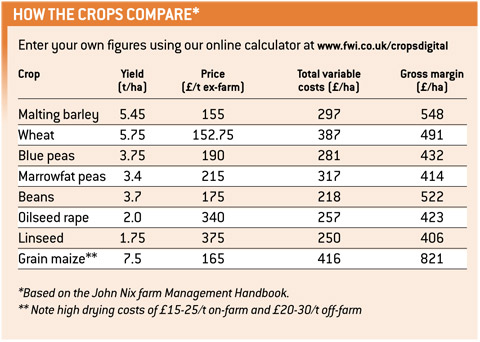