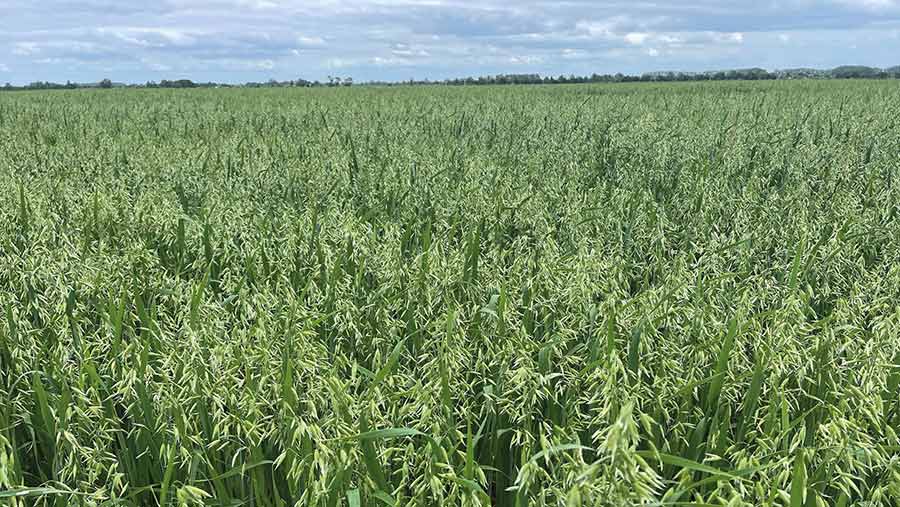 New to the Recommended List (RL), the spring oat variety Merlin offers an attractive combination of yield, quality and disease resistance, proving to be an all-round performer for both millers and growers.

Bedfordshire-based Richardson Milling – said to be the second biggest oat miller in Europe – is looking for commercial loads of the variety this year, as long as the desired quality thresholds are met.

After carrying out a selection of independent variety trials, the firm’s agronomy manager Brin Hughes explains how the mill has “had an eye on Merlin”.

See also: Why sowing in February could up spring oat yield and quality

The variety produces high-yielding, high-quality oats, with the lowest screening losses of any spring oat variety. It also has good disease resistance, including an 8 for mildew, and is early to mature.

“We got 6t/ha from the harvest, milling quality was over the spec, bushel weight was over 50kh/hl,  which is the level we draw, and screening losses were good, at under 2%.

“We need under 30% hulling losses, and Merlin came in at 26%. A standout characteristic for Merlin is its standing ability – we did see some lodging in the trial with other varieties, but not the Merlin,” says Mr Hughes.

According to Gemma Clarke at Cope Seeds and Grain – the UK agents of the new variety – Merlin performs well when grown organically or conventionally, with good standing ability.

“Merlin spring oat is suited to all regions in the UK and because of its early maturity, it will do well in wetter climates and the north of the country, where maturity is vital.

“It delivers consistency and quality to millers, due to its high specific weight and high kernel content,” she says.

Luke Palmer, an arable farmer based in Stretham, near Ely, grows Merlin for seed. He was pleased with results in his first year of growing the variety and is looking to grow it again.

He planted 16ha in two field trials, one field was organo-mineral soil and the other deep peat.

“We drilled late on 9 April for blackgrass control, and because we followed a later-lifted vegetable crop on the Fen,” explains Mr Palmer.

The later drill date proved effective for weed control, with an average yield of 6.2t/ha.

“Merlin has got good standing, and it harvested well and relatively early, on 1 and 2 September on those two fields,”

Furthermore, it acts as a great break crop and enabled him to drill a first wheat right afterwards.

“Plus, we could grow it behind a late sugar beet or vegetable crop,” he added.