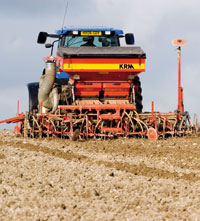 “If spring barley is going to be a first cereal, such as after peas, you must understand what the residual nitrogen is,” says Simon Phillips of New Farm Crops. “You should always assess the fertility of your land.

But under conditions of low fertility – for example, where the crop is a third or fourth cereal – growers may need to increase N dressings or bring them forward. “The important thing is to check, especially after all the rain we’ve had,” says Mr Phillips.

Where growers consistently get low N grain of about 1.45% from this regime, adding more nitrogen won’t help, warns Mr Phillips. “It’s better to delay your applications by one week. So in this situation, apply it at GS15 and GS24.”

In Scotland, where lower grain nitrogens are required, there is also a case for avoiding N fertiliser in the seed-bed on fertile sites.

“With lower fertility, our Scottish trials suggest cutting the seed-bed nitrogen back to 25% of the total, applying the rest about 10 days later.”

Spring barley should always be drilled in good conditions, urges Mr Phillips. “On exposed land, this shouldn’t be before the end of January. And if you know your variety, you should alter the seed rate accordingly.”

For Tipple, he recommends 350 seeds/sq m, but for Quench the rate should be 375 seeds/sq m. “And Cocktail, a high tillering variety, should be sown at 325.” Scottish rates should be 5-10% higher.

More disease carryover can be expected where spring barley is a third or fourth cereal, especially after winter barley. So two fungicide applications are always worthwhile – even in a low disease pressure year, he advises.

“Although rhynchosporium is our primary threat, we’re also seeing increasing incidence of net blotch. Dry, windy weather seems to be in its favour.”

Fungicide timings in Scotland tend to be earlier than those used in England.

“The T1 spray is not necessarily linked to GS31,” says Mr Gilchrist. “Our advice is to spray from the mid-tillering stage, when there is reasonable ground cover.”

The T2 treatment is targeted at awn emergence. “This is to make sure you control ramularia. If you delay the second application beyond flowering, the fungicides are less effective.”

Beware of relying on a single mode of action, he adds. “You need to use at least two. A triazole should be the building block of the programme and Bravo (chlorothalonil) is a key component for ramularia protection.”

Growers should also be confident of their seed germination status before sowing.

“There can be big difference between seed lots. Whether you’re using home-saved or certified seed, you should always check the germination.

“If levels are below normal, the seed can still be used. But you’ll need to make adjustments to sowing rates.”

He also stresses the importance of good soil conditions for drilling. “The ground needs to be reasonably dry. February is usually the earliest practical for this in Scotland, but the norm up here is from the third week of March into April.”

Spring barley has long been grown on Farmers Weekly’s southern Barometer farm. “We have it for malting on a specific area – the Downs’ chalky loam,” says Andy Barr. “We grew Tipple last year with some extraordinary yields. It ticks all the boxes.”

But for eastern Barometer Chris Moore, on heavy land, it will be a forced “low input” substitute for unsown wheat. “I’ll have about 120 acres – probably Tipple – not for malting.” Its main use, via relatively late sowing, will be in helping control blackgrass.