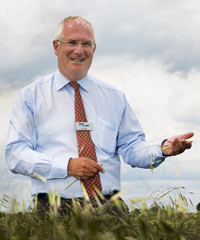 Where brome seed has shed and there has been insufficient moisture for it to germinate, brome seed will still be viable, he says.

“If the ground has been ploughed or worked deeper than 12.5cm, seed will be buried and less likely to emerge,” he says. “But, min-till operators could have a problem if ungerminated seed is left near the soil surface.”

In these situations it is even more important to have a good control strategy in place, he stresses.

Applying a flufenacet based or Avadex pre-emergence herbicide is a good place to start, he suggests.

“For best results this should then be followed with Atlantis or Broadway Star later in the autumn.”

Devon-based agronomist, Neil Potts, from Matford Arable, reckons it’s essential to hit sterile brome hard in the autumn as the plants are too resilient in the spring.

“Products such as Monitor, Attribut and Pacifica just don’t work in our area – they look like they’ve made an impact initially, but the brome recovers shortly afterwards.”

A pre-emergence spray followed by Atlantis later in the autumn is the most effective approach, he says. “I have had best results with Defy and Liberator at pre-emergence followed by Atlantis at full rate (400g/ha) later in the autumn. It’s not worth cutting back rates for risk of resistance build-up. Most of my patch doesn’t have a problem with blackgrass so I’m thinking of trying Broadway Star in place of Atlantis on some fields.”

Despite dry seed-beds he is advising growers to push on with pre-emergence applications.

“Without a pre-emergence herbicide, there is a huge brome flush, which is too much for Atlantis to deal with on its own,” he adds.

Gloucestershire-based agronomist, Neil Donkin, reckons waiting to apply a sulfonylurea in the spring is the best option in some cases.

“If you are confident all of the brome has germinated, go in with full-rate Atlantis or Broadway Star in the autumn. However, if it hasn’t all come through it could be better to wait until the spring. The only problem with waiting is that the brome can be too big to gain a good level of control.”

Hitting the weed with a pre-emergence herbicide in early autumn, is also important, he says. “I am trying out Defy and Liberator this year as I have heard good reports. But at £50/ha it’s pricey,” he says.

Most of his ground with brome also had blackgrass so Atlantis was the only option. “Stomp should applied with Atlantis, but you if you are using Crystal you can’t use too much pendimethalin.” After Christmas, Atlantis is still effective, but later in the spring Pacifica is the better option, he adds.