Branching out from pure arable production into a range of stewardship options has produced some useful income as well as personal enjoyment for David Hutchinson.

Mr Hutchinson, who manages 400ha at Strixton, near Wellingborough, Northamptonshire, is this year’s winner of Natural England‘s Future of Farming Award, which celebrates environmental excellence and innovation in farming.

He signed up to ELS almost three years ago for what he describes as purely financial reasons at the time, but he has since seen valuable environmental gains.

“It was pointed out to me that I would get £1000 a month,” he says. “And that was without sacrificing any productive land or changing my farming system.”

Although ELS proved straightforward, with all the points coming from hedgerow management, low nitrogen use on grassland and management schemes, his decision in 2006 to go into HLS proved more challenging.

“HLS is much more demanding and I needed specialist help,” he says. “There are many options to choose from to enhance farms – in our case, we have preserved archaeology by reverting arable land to grassland and have significantly improved habitats.”

This decision has resulted in 20% of the farm being taken out of arable production. 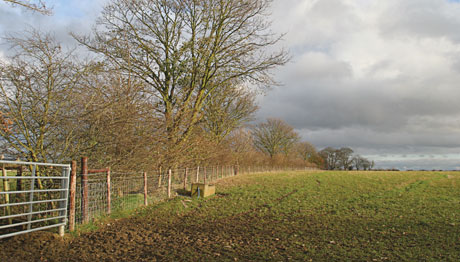 Capital items such as fencing gates and troughs needed for new grassland areas were paid for under the reversion scheme.

Financial help was available for capital items work, so the fencing, gates ands troughs required for sheep grazing could be installed, he says.

Other HLS options have included the protection of an SSSI and the use of 6m margins in all fields to provide wild bird food and habitat. The margins have also helped Mr Hutchinson with LERAP requirements.

The schemes have greatly benefited the farm’s cash flow, he says. “The money comes in twice a year. That shouldn’t be underestimated on an arable farm. The cash arrives a good year before the proceeds of selling grain. It made a huge difference to us.”

He admits having a moment of doubt when grain prices reached £200/t. “But that proved to be a bubble and they’ve come down again.”

Over-wintered stubbles haven’t been possible because of heavy soils and blackgrass, he adds.

Mr Hutchinson stresses he still has a viable commercial farm, which now has improved accessibility for farm machinery. “The margins have helped to square off fields and remove awkward corners. We have improved public access, but have not increased it, as we already have a good network of footpaths and are encouraging nesting lapwings.”

The biodiversity benefits have been instant and very rewarding, he says. “We saw enormous change within a year. We now have many more species and far greater numbers of wildlife than before. It’s been easy to bring nature into our back garden.”

The only cloud on the horizon is the possibility that mitigation measures might be imposed across 5% of the cultivated area to compensate for the loss of set-aside. “This is madness – we’ve already taken out 20% of the farm,” he says. “Farmers won’t go into these schemes if they then have to do more.”

Are ELS and HLS good for business?

“For many, they mean improved profits without the need to crop your poorest land,” he says. “And the environmental benefits are enjoyed by the majority of farmers.”

Looking ahead to harvest 2009, Mr Wells says the fertiliser costs for a first wheat are almost more than the entire growing costs for the same crop last year.

“The net margins for both wheat and oilseed rape are very small. The question to ask now is whether you can afford not to be in ELS.”

HLS offers higher income returns, but these are in return for management input, he says. “It’s also a much more detailed application process and it is competitive.”

Existing Countryside Stewardship schemes, which are coming to an end, offer good potential for HLS, adds Mr Wells. “Get a pre-assessment visit, so you know what work is involved. And enlist help from organisations like the RSPB and Natural England.”