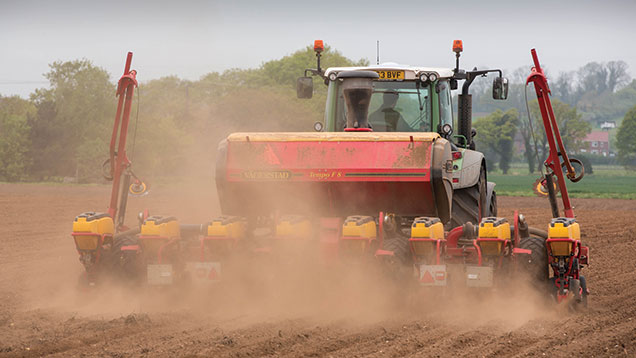 Growing maize and other crops for energy production is helping a Suffolk farming business to eradicate his blackgrass problem.

The decision to invest in a 1.4MW AD plant was the catalyst for considerable change to the farming system run by Geo E Gittus & Sons in west Suffolk.

Farms director Mark Wells recalls that the old arable rotation based around winter wheat and oilseed rape was making the business far too reliant on the quick fix provided by the agrochemical can. It also meant insufficient organic matter was going back into the predominantly heavy soils.

“Added to this, a complex business structure involving seven contract farming agreements was stifling investment in infrastructure,” he says. “There wasn’t enough capital expenditure on items such as drainage, due to the short-term nature of the land tenure.”

Then at the post-emergence three- to four-leaf stage we apply 0.17 litres/ha of Milagro [nicosulfuron] with 0.6 litres/ha of Callisto [mesotrione], costing £36/ha.

“In fact, it you add in the three glyphosate sprays, total herbicide expenditure is more like £100-110/ha.”

The inevitable result was that blackgrass was able to thrive, he says. “As on many other farms, the weed population developed herbicide resistance and our use of effective cultivation techniques was limited by time and soil type. We were up against it.”

Adding another part to the business – in the form of an AD plant – has been a partial solution, mainly due to changes to the rotation.

Maize, energy beet and rye have all featured since 2010, even on heavy land, allowing better use of cultural control techniques and an integrated approach.

“We planted our first maize crop in spring 2010,” recalls Mr Wells. “The AD plant didn’t come online until the beginning of 2012, so we gained some experience before we started using the crop as a feedstock.”

Energy beet was planted in spring 2012, but has since been replaced, and the first wholecrop rye was drilled in autumn 2013.

The farm’s heavy clay soils are a main driver for operations, says Mr Wells. “Our aim is to get into the fields at the right time and off as quickly as possible, so that we minimise unnecessary operations at the wrong time.”

Soils and their health are also a priority, he admits. “Pig muck from an indoor finishing unit elsewhere on the farm is added back to the soil at every opportunity, as is digestate and sewage sludge. We use it to increase the organic matter content, improve soil structure and extend our working windows.

“It is our greatest asset, so looking after it for the long term is paramount.”

Maize is established by ploughing and subsoiling in August, so that the weather can play its part, before the ground is sprayed off with glyphosate to remove any blackgrass. “We also spray it off in the spring – often twice – so any subsequent flushes are dealt with.”

The land is pulled down with a Cultipress behind a Crawler before drilling with the farm’s own drill to avoid seed unit bounce. “We may then roll, or not, according to conditions.”

After maize, winter wheat is grown. “We literally chase the forager out of the field with the Topdown and drill straight behind it.

We have taken samples of wheat grown behind all crops, to check for fusarium and possible mycotoxins, but there haven’t been any issues at all.”

Whole crop rye was introduced in 2013, to avoid an overreliance on maize. In the ground before the end of September, it is established using non-inversion cultivations and treated with one of a portfolio of pre-emergence herbicides.

“Hybrid rye does outcompete blackgrass in the autumn to a level,” he says. “The weed is shaded and sits below the crop canopy, so its development is restricted.”

The rye harvest takes place in late June, when the sun is shining. “It’s certainly easier to harvest than maize. And it gives a good biogas yield.”

After rye, he has time to apply more muck, before cultivating. That creates another couple of chances to spray off blackgrass, before oilseed rape is drilled. “We’ve gone back to drilling rape conventionally with variable-rate technology, concentrating on getting it in and established early after barley and rye.”

Mr Wells is also looking at including two- to three-year grass leys, to help with the blackgrass battle, and will be planting some lucerne this autumn. “It will either go to the horse feed market or be used in the digester.”

His experience over the past few years has shown the importance of using cultural control methods to help with weed control.

“There’s nothing wrong with a plough or any other cultivation technique used at the right time and in the right situation. We always plough ahead of maize and sugar beet.”

He also maintains some flexibility with the rotation. “It shouldn’t be set in stone. There’s nothing worse than having to force a crop in.”

Most importantly, blackgrass is now down to manageable levels.