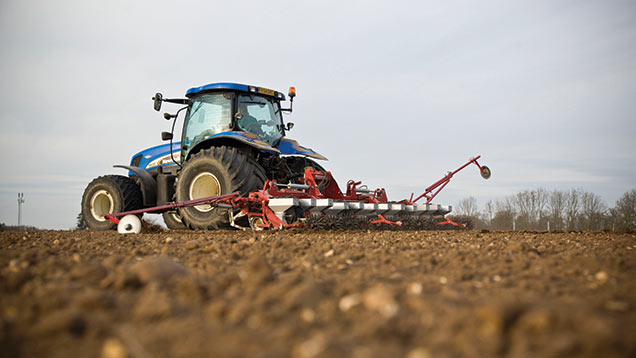 The decision on whether to drill a beet cyst nematode-tolerant sugar beet variety has typically been a tricky one, as growers would incur a significant yield penalty.

However, that decision has been made much easier with the addition of four high-yielding BCN tolerant-types to the Descriptive List (DL) for 2016 planting.

With no chemical control available for BCN, growing such varieties is the main tool available to growers to minimise the effect of the soil-borne pest on crop yield.

What is beet cyst nematode?

The patchy nature of BCN meant that in the past, if growers planted a problem field with a tolerant variety, it would minimise the yield effect on infested soil, but they would have to accept a 5-10% yield reduction compared with the best standard varieties on clean soil – but that has now changed.

The four new tolerant varieties include Betaseed’s variety BTS 755 – marketed in the UK by Limagrain – which yields 102.8% of controls for sugar yield in the absence of the pest.

BBRO lead scientist Mark Stevens says this represents a shift  that will see the genetics become standard, without the yield penalty of previous BCN varieties.

Varieties with resistance to the sugar beet virus rhizomania were at one time considered niche, but after an eight-year period since its introduction, all varieties on the RL contain the Holly (Rz1) rhizomania resistance gene.

Varieties are split into two lists, with the RL including the highest-yielding varieties with standard Rz1 resistance and the DL those with Rz2 resistance to the aggressive AYPR strain of rhizomania and BCN.

“I would expect BCN tolerance to become the norm on the RL in the next five to 10 years, which is a positive story, as the pest is starting to appear in areas not seen before.

“Some growers may not be aware they have a low-level problem, so if and when everyone is growing tolerant beet, we may well see a lift in overall crop performance as a result,” explains Dr Stevens.

So how big is the BCN problem in Britain? The last British Beet Research Organisation (BBRO) survey looking at the pest estimated about 7% of the domestic beet area was infected, but soil sampling can be notoriously hit and miss.

A soil testing collaboration between British Sugar area managers and breeder KWS in 2014-15 took samples from spoilage heaps around clamps and cleaner/loaders around beet growing regions.

Of the 189 samples, 23% were positive and were concentrated in the known hotspots around Ely and the Wissington factory, but positives were also found elsewhere.

With sugar reform, he also expects beet production to intensify on a smaller area, which will not aid the reduction of the pest.

“Longer rotations are most effective at reducing levels of BCN, but tolerant varieties will help protect yield and are now a much more viable option,” he says.

Mr Witherford’s colleague Jens Loel provides agronomy support for KWS in Europe and says European growers have been quick to accept they have a problem with BCN and that variety choice is part of the solution.

In the Netherlands, about 40% of the sugar beet area is sown with BCN-tolerant varieties, with its German neighbour just shy of 30%.

Last year, Belgium also saw a 10% rise in plantings and France 2.5%, while just 5% of the UK area is currently drilled with these types.

“They have had access to high-yielding tolerant varieties for the past two years and some are even growing them as insurance, even where they don’t have a confirmed problem, as the yield gap is so small now,” he adds.

Bram van der Have, Limagrain’s UK sugar beet consultant, says the introduction of the higher-yielding tolerant varieties could bring a similar shift in attitude in the UK.

Rather than ignoring the problem, growers will be more inclined to implement a testing regime to find out the extent of the BCN problem on their farm as they have a more viable solution.

“The problem has been quick to spread in mainland Europe and at the same rate, you would expect the UK to have a much bigger problem than there is so far.

“It could be the maritime climate that is holding it back, but we need much more research into the extent of the problem,” he adds.

Despite the jump in yield, experts agree that for now – particularly in tough times for the sector – UK growers should still drill the top-yielding Rz1 varieties, unless BCN is confirmed.

“You are still better to go for yield,” says Mr Loel.

“We have some light soils, including some blow-away sands, and after soil testing confirmed high cyst numbers, we have introduced biofumigation crops into the rotation, alongside resistant varieties such as Thor and Mongoose to mitigate BCN.

“It halved yields in some fields on our lightest land in a hot and dry year, but we have brought that back up to where it should be. My advice would be to get testing done to find out your base level.”

“We fill one outside drill unit with a BCN-resistant variety, so two rows will run adjacent to each other across the whole of our beet area. I’ll then assess the crops from up in the air a couple of times through the season.

“At the moment it’s not much of a concern, but if I see any patches where the tolerant variety is healthy and the other not, I’ll get the soil tested to confirm the cause and go from there.”