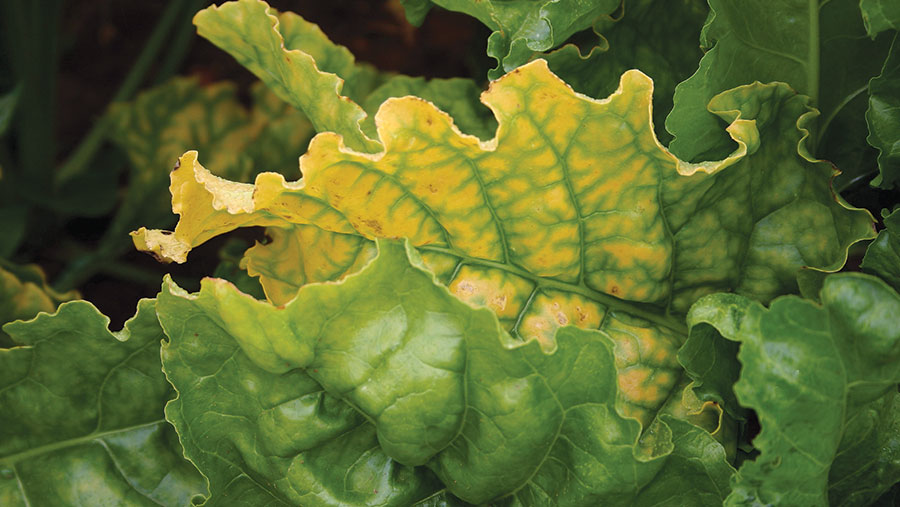 Sugar beet growers are urged to follow a four-point plan to help control beet yellows this season, as aphid populations rise due to a mild winter, and just one active insecticide remains to control virus spread.

After the ban of neonicotinoid seed dressings in 2018, crops have been left vulnerable to aphid attack, with just a single application of Teppeki (flonicamid) available to control the disease, which is capable of reducing yields by up to 50%.

Mark Stevens, head of science at the British Beet Research Organisation (BBRO), warns growers that beet yellows pose the biggest threat to sugar beet crops, and that epidemics are likely to increase due to favourable weather for aphids and losses of key agrochemicals.

“In 2019, 55% of fields were infected, compared with just 18% in 2018, and this situation is likely to worsen as aphid populations have been able to build up, with few frosts killing the pests and limiting virus spread,” he says.

Prof Stevens explains how good crop hygiene and the removal of infection sources should be the first step taken to minimise the build-up of aphids – particularly the peach-potato aphid.

Aphid populations are now at their highest, with more than 39,000 winged peach-potato aphids caught in a BBRO trial across 63 UK sites during a 12-week trapping period in 2019.

This year, overwintered aphids have survived due to milder temperatures, while green bridge crops provide a habitat where aphids reproduce.

What is beet yellows?

The viruses are transmitted when aphids feed on sugar beet crops – the peach potato aphid (Myzus persicae) is the aphid species of major concern.

Symptoms include circular yellow patches on leaves, with brittle outer leaves showing yellow between the veins. These symptoms occur during July and August, but at this stage, the disease is too late to control, which is why effective monitoring is crucial.

“Limiting sources of infection such as spoilage heaps, weeds and root remnants is essential, otherwise this can be a ticking time bomb for disease,” says Prof Stevens.

It’s important to control the green bridge by clearing old spoilage heaps and clamps as soon as possible, while minimising crop volunteers and weed species with well-timed herbicide applications are key.

However, the rise in overwinter cover crops is creating the perfect environment for aphids to survive winters, which makes the choice of species in cover crop mixes increasingly important.

“Try to avoid brassicas, as these are excellent hosts for aphids. Vetch crops are good to use, but these can be hosts for other viruses. It’s about finding the right balance of species to use,” he adds.

Rapid crop establishment to the 12-leaf stage can help reduce sugar beet susceptibility to the beet yellow virus, as this is the onset of mature plant resistance.

Prof Stevens advises growers to enhance crop growth to this phase to reduce the time crops spend in the earlier and more-susceptible growth stages.

“It’s important to remember that mature plant resistance is a gradual shift and not a sudden increase in resistance,” he says.

During this mature stage, the sap in beet crops begins to build up phenolic compounds, which, when ingested by aphids, clog up the intestines and kills them.

Ensuring uniform crops and avoiding bare patches in fields can also reduce aphid attack and numbers that migrate due to the pest’s strong attraction to bare soils.

He also explains how a 1C temperature increase can cause migration to begin at the end of April instead of the middle of May, highlighting the importance of rapid crop establishment.

“With warmer and drier springs, earlier and larger migrations of pests may occur at lower growth stages, when crops are less resilient,” says Prof Stevens.

There is no evidence that increasing seed rates above 100,000 seeds/ha will bring additional benefits to establishment – in fact, this can have a detrimental effect on virus spread. 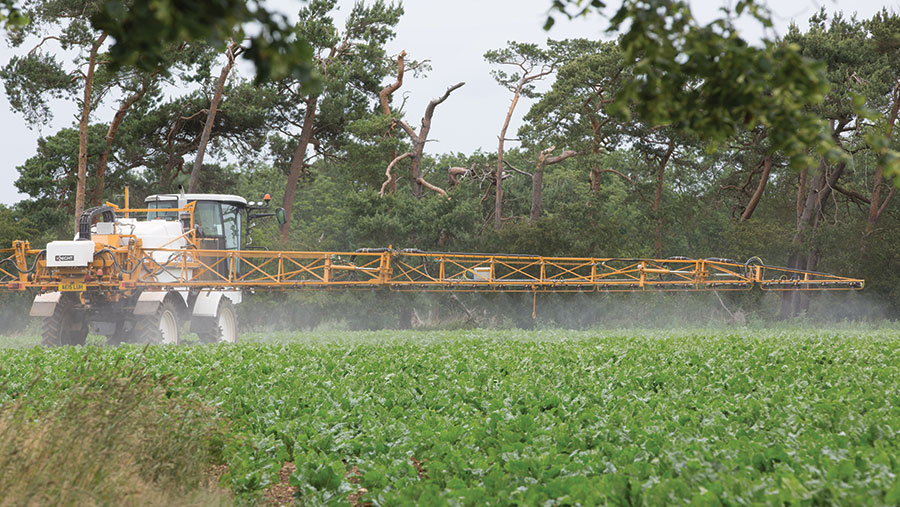 Vigilance and monitoring sugar beet crops are key to identifying threshold levels and controlling virus spread, so understanding the pest’s lifecycle can help with this, says Prof Stevens.

Winged aphids start to migrate from winter hosts to summer hosts from late April to early June, with populations peaking during July. Wingless forms are usually first reported in May until September.

Aphid identification is often difficult, as the pest does not form in dense colonies, while other insects such as thrips and beneficials, such as globular springtails, become active at similar times.

Green, wingless aphids are typically found on the heart leaves, within folds at leaf margins and on the underside of leaves.

The threshold for applying aphicides is based on the number of wingless aphids in the crop, with the BBRO recommending counting aphids on 10 plants across the field.

If the threshold of one green wingless aphid per four plants up until the 12-leaf stage is met, treatment is justified.

Growers should regularly check the BBRO aphid forecast, as the organisation will be monitoring aphid numbers and virus pressure throughout the season, and will be issuing advice to growers.

With just one application of Teppeki available to UK growers, a timely and targeted treatment is essential to maximise the spray’s efficiency.

Prof Stevens explains how the single use of Teppeki to control beet yellows is insufficient and that the industry cannot rely on just one active, as aphids are likely to build up a resistance to the aphicide.

It is therefore vital growers only spray at the specified threshold for green wingless aphids to reduce chances of resistance.

“You need three sprays in an average season to stop virus yellows in beet crops in the absence of seed treatments. We need to find other solutions,” he says.

If there is an infestation in a part of a field, Prof Stevens still recommends spraying the entire field to limit virus spread.

He also says growers should avoid the use of pyrethroids and carbomates, as more than 80% of aphids are resistant to these chemicals.

Research into sugar beet varieties that are resistant to the beet yellows virus is under way, with varieties expected to be available to growers within three years.

Prof Stevens was speaking at the BBRO event BeetTech20 held earlier this month.